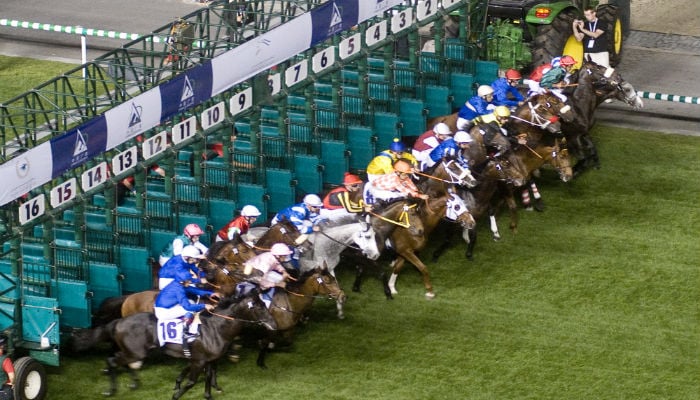 1. This coming Saturday will see the 18th running of the nine-race Dubai World Cup, which carries a total combined prize of $27.25 million.

2. A total of 13 countries will be represented at the event, including contenders from the US, Germany, Japan, Ireland, Hong Kong and New Zealand.

3. Thirteen runners are hoping to win the prestigious $10 million World Cup this year, including 2012 champion Godolphin’s Monterosso. However, no horse has ever won the Dubai World Cup twice so far.

5. But it’s not just the horses that will receive sizeable rewards; one of the prizes of the Jaguar Style Stakes – which judges the event’s fashion quotient – this year is a 2013 Jaguar XK Coupe, while the winner of the Longines Most Elegant Lady take home a rose gold ladies’ watch that is set with 30 diamonds and a white mother-of-pearl dial.

6. The promo for the Dubai World Cup 2013 went viral on social networking sites such as Facebook and has received over 47,000 views on YouTube.

7. The glitzy extravaganza will conclude with a special solo performance from the acclaimed ‘Kiss From a Rose’ singer, Seal. Dubai duo Olly Wood and Greg Stainer will be opening and closing for him.

8. The first race begins at 4.30pm and the World Cup starts at 10.05pm. Tickets range from Dhs25 for general admission to Dhs350 per head for a basic package. For a table of ten at the exclusive Meydan Terrace Preferred, you will need to shell out Dhs32,500.

9. The event will take place at Meydan, Dubai’s flagship 2,000-metre racecourse, which includes 60,000 seats in the grandstand. The venue is also home to the world’s only five-star trackside hotel, The Meydan.

10. If you are a equestrian racing enthusiast and want to see the Dubai World Cup contenders at close quarters before the big day, you can ‘Breakfast With The Stars’ on Thursday, March 28. Organised by Dubai Racing Club, the event will allow fans to watch the runners and tuck into an al fresco buffet breakfast for Dhs295 per head.