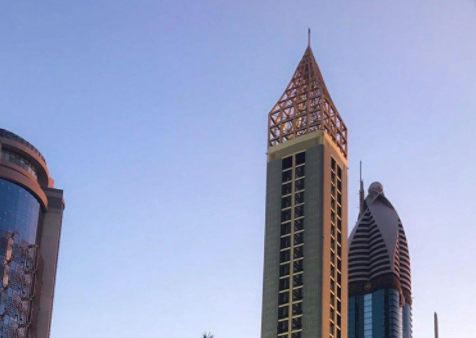 Dubai will become the home of the world’s new tallest hotel in the coming weeks as the Gevora prepares to opens its doors.

The emirate already held the record for the world’s tallest hotel since the opening of the 355m JW Marriott Marquis in 2012m but the new hotel will surpass this by one metre to stand at 356m, according to What’s On.

The property, in the Trade Centre area of Sheikh Zayed Road, features 528 rooms spread across its 71 floors along with four dining options – an all-day dining restaurant and coffee shop on the mezzanine floor, a Mediterranean/Middle Eastern restaurant on Level 12 and a pool bar.

Other facilities include a health club and Jacuzzi, as well as a luxury spa on the 71st floor.

The views from the top of the property, which is scheduled to open in the first quarter, were displayed in a Gevora Hotel Instagram post.

On top of the world’s tallest building the Burj Khalifa, Dubai is home to a number of the world’s other tallest hotels including Rose Rayhaan by Rotana and the iconic Burj Al Arab.