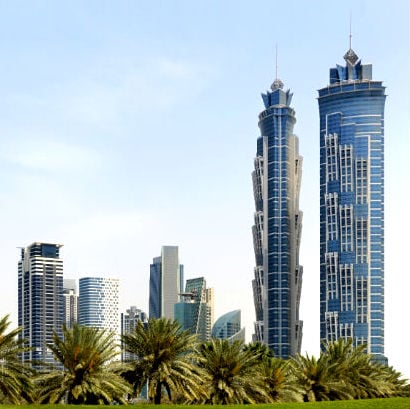 The world’s tallest hotel, the JW Marriott Marquis Hotel, has officially opened its doors to its first guests in Dubai.

Towering at a height of 355 metres – 26 metres short of the Empire State Building – the JW Marriott Marquis, located in Business Bay, calls itself Dubai’s first convention and business destination hotel.

The hotel, which will have 1608 rooms when complete, opens in several phases, with its first tower of 804 rooms and suites in its soft opening phase, and with three restaurants opening today.

By January, the hotel will have all nine restaurants and five bars and lounges open, with the grand opening scheduled to take place in February 2013.

“The JW Marriott Marquis will add significantly to Dubai in its drive to become the preferred choice for meetings, incentives, conference and events business,” said Queitsch.

“We are working in tandem with the Dubai Tourism and Commerce Marketing and Dubai Convention Bureau to put Dubai on the global business destination map,” he added.