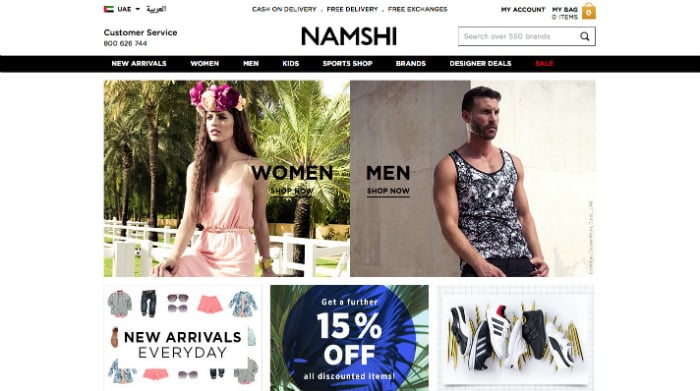 The five businesses to be combined include UAE-based Namshi, Dafiti from Latin America, Jabong in India, Lamoda in Russia & CIS and Zalora – operating in South East Asia & Australia.

The new group, called GFG, will operate across the five continents covering 23 countries with a EUR 330 billion ($433.7 billion) fashion market and population of over 2.2 billion people, a statement said.

Based in Luxembourg, the new entity has a combined valuation of EUR 2.7 billion ($3.5 billion), according to the last funding rounds of each of the five firms.

The three largest shareholders in GFG will be Kinnevik, Rocket and Access Industries, with 25.1 per cent, 23.5 per cent and 7.4 per cent ownership interests, respectively.

The GFG companies will continue to be led by their respective founders and management teams with a “few select additions to the leadership team,” the statement added.

Lorenzo Grabau, CEO of Kinnevik will serve as the chairman, while Oliver Samwer, CEO of Rocket will be GFG’s deputy chairman.

The transaction is subject to approvals, and is expected to be closed is expected in late 2014, the companies said.

“With approximately EUR 350 million ($460 million) of cash as of June 30, 2014, GFG is very well capitalised to continue to execute on its plans and capture its growth opportunities,” the statement said.

GFG had 4.6 million active customers and over 7,000 employees as of June 30. For the first six months of 2014, the five websites together had 353 million unique visitors, received 8.4 million orders and generated EUR 436 million ($573 million) of gross merchandise volume.

Going ahead, GFG will market international apparel and accessories brands and a selection of local brands developed for specific ethnic markets such as India, Indonesia and the Middle East.

It will maintain multiple business models including full inventory, branded shops and marketplaces and will also explore the development of adjacent categories like personal care. Mobile commerce will also remain a core focus for GFG through the development of mobile applications.

Oliver Samwer, co-founder and CEO of Rocket, said: “GFG will be focused on capturing the massive growth opportunity of fashion e-commerce in emerging markets. Each of the business units will be able to build on the original Rocket platform and continue to leverage knowledge and expertise gained across 23 countries.”