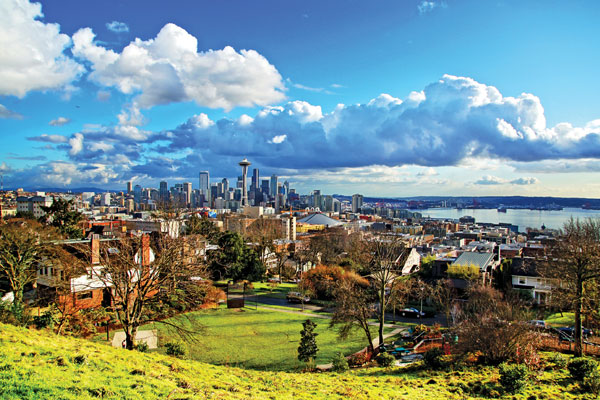 Every Seattle resident has a ready statistic about how rapidly the city is growing — 75 people move here each day, you will hear, or maybe it is a thousand new arrivals a week. Whatever the actual figure, the impact on residents is real: rising costs, housing shortages, increased traffic and herds of construction cranes — even the Space Needle has been under renovation.

But for visitors, the tech-fueled growth also means new sights and flavours to explore. Wander far from the downtown core to discover niche museums, nature reserves, and plenty of Pacific Northwest seafood.

Pause for a taste of the Pacific Northwest at the Walrus and the Carpenter, a bustling restaurant run by acclaimed local chef Renee Erickson. The popular order at this hour is oysters, varieties of which often include Hood Canal favourites — sturdy Hama Hamas, saline Baywater Sweets — alongside other Puget Sound gems like plump Pickering Passages.

The Ravenna restaurant JuneBaby, chef Edouardo Jordan’s homage to Southern food, has much of the food world fawning, but there are plenty of appetising alternatives (without the hour-plus wait) within walking distance in nearby Fremont. Plan ahead and reserve a table at Kamonegi, chef Mutsuko Soma’s cosy 32-seat soba restaurant that opened last October. A recent meal included crisp sea-eel tempura, yakitori-style duck tsukune (meatballs) and bamboo baskets of hand-cut soba noodles with dipping sauce and wasabi. Or stumble a few blocks to Manolin, a nautical-themed restaurant with a large horseshoe-shaped bar, aquamarine-tiled walls and superb seafood dishes, such as rockfish ceviche with avocado and shoestrings of sweet potato. Dinner for two at either, about $60.

Put the digital devices aside at Analog Coffee, a laid- back coffee shop beloved by locals for its back-to-basics ethos: stacks of vinyl and cassettes, print newspapers and magazines, and an excellent cold brew on tap. On the way there, swing by Capitol Hill’s Bakery Nouveau for a superlative morning snack: a rich double-baked almond croissant filled with sweet almond cream ($4.25).

Seattle is no stranger to daring architecture (see the cage-like facade of the Seattle Central Library, or Frank Gehry’s multicoloured metal armour at the Museum of Pop Culture). The latest addition is the Spheres, three interconnected glass-domed conservatories that opened on Amazon’s downtown campus in January. But good luck getting inside: Public entry to the Spheres botanical gardens requires a reservation, either for a bimonthly Saturday open house or for a guided headquarters tour (book online weeks in advance). Or skip the Spheres and instead spend the morning at the Living Computers: Museum + Labs, a fascinating technology museum filled with computing artefacts, like the Oregon Trail on an Apple IIe, and cutting-edge exhibits about convolutional neural networks and a 3D-printed self-driving car. Admission, $16.

Vietnamese, Japanese or Thai? For lunch, choose among three new stars on Seattle’s culinary scene serving flavours from the other side of the Pacific Ocean. At Pho Bac Sup Shop, a buzzy Vietnamese restaurant run by three siblings, you can find aromatic short-rib pho with oversize bones jutting from the steaming bowls. Fremont Bowl, which opened late last year, quickly earned a following for its donburi (rice bowls), particularly the sashimi-topped chirashi piled with a rainbow of tuna, salmon, yellowtail, shrimp, freshwater eel and masago roe. Or opt for a restorative plate of pad thai at Little Uncle, the new sit-down locale of a popular takeout window, where the silky noodles are served with peanuts, roasted chiles and sugar as seasonings on the side. Lunch, about $15.

The future of public broadcasting looks bright at KEXP, the city’s intrepid independent radio station. In 2016, the famed station — the first to play Nirvana’s debut single, Love Buzz — welcomed the public to its impressive new facility designed by Seattle’s SkB Architects. It features performance spaces, an onsite coffee shop and record store. Time a visit to catch a live show — the station holds over 400 a year — on the stage in the spacious lobby or in the studio’s intimate viewing gallery, which recently hosted the Breeders and Portland’s indie-folk band Horse Feathers. (Find upcoming events on KEXP.org.)

Come as you are — in fleece, flannel or finery — to dinner at No Anchor, a casual downtown gastro pub. Since opening in 2016, this overachieving beverage bar has earned accolades for pairing top- notch brews with refined plates, such as tempura-fried hen-of-the-woods mushrooms ($10), smoked pickled mussels with burned-garlic aioli ($11) and Russian-style pelmeni dumplings with fresh cheese ($16). 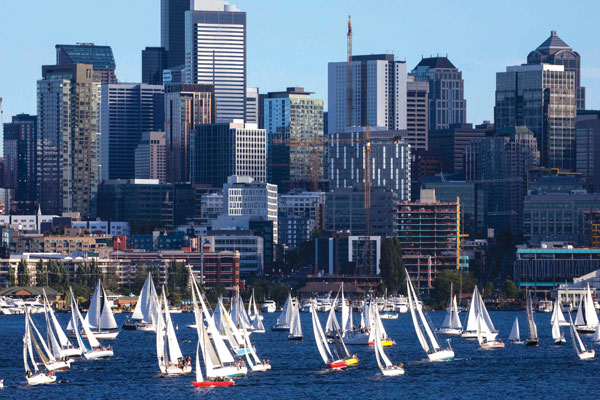 You can find Columbia City Bakery’s award-winning loaves at restaurants and farmers market stands around town, but it is worth an early-morning detour to the cafe, which last year began serving seasonal hand pies and hot-pressed sandwiches. Snack on some soft pretzel knots (75 cents each) while waiting for the main attraction: a fresh-pressed Vermont Club with turkey, bacon, Cheddar and apple-onion jam on pain de campagne ($11).

Whatever the weather, crowds convene at the Ballard Farmers Market where vendors peddle Washington state products — from fresh produce and shellfish to charcuterie, cider and cheese — in the neighbourhood’s historic heart. Browse the seasonal bounty, jostle among buskers and street performers, and visit Prism, a market-adjacent boutique where offerings recently ranged from artwork by local illustrator Sierra Graves to unisex perfumes from Ballard-based Blackbird. Then detour to Venue, a nearby art studio, gallery and shop where products from dozens of area artists include pretty hand- printed letterpress cards from Seattle’s Ilee Papergoods.

Save the best for last: an afternoon spent in one of the Emerald City’s myriad green parks. For fresh air on a wide sandy beach, head northwest to the peaceful Golden Gardens Park. Walk along the shore to revel in the views across the Puget Sound, where you might spot harbour seals floating belly-up in the calm water offshore, and on clear days, spy the Olympic Mountains beyond. Or if skyline views are what you are after, head southeast to Gas Works Park, an unusual public park on the site of a former coal gasification plant, parts of which have been turned into a play area. Find a spot among the kite-fliers on the surrounding lawns to watch seaplanes land on the waters of Lake Union.

Another downtown option is the Hotel Andra, a Scandinavian-themed boutique property with 119 guest rooms, two restaurants and a Northwest-meets-Nordic design aesthetic featuring alvar aalto-designed lounge chairs and stacked firewood beside the lobby’s large granite fireplace (2000 4th ave.; 206-448-8600; hotelandra.com; from about $300).

The Hotel Theodore is a refined 153-room property that reopened in 2017 after a style- minded renovation. In the art Deco tower that formerly housed the Roosevelt Hotel, guests are now surrounded by Seattle-sourced products, from a collection of local art and artifacts to house-roasted beans in the on-site coffee shop (1531 7th ave.; 206-621-1200; hoteltheodore.com; from about $250).