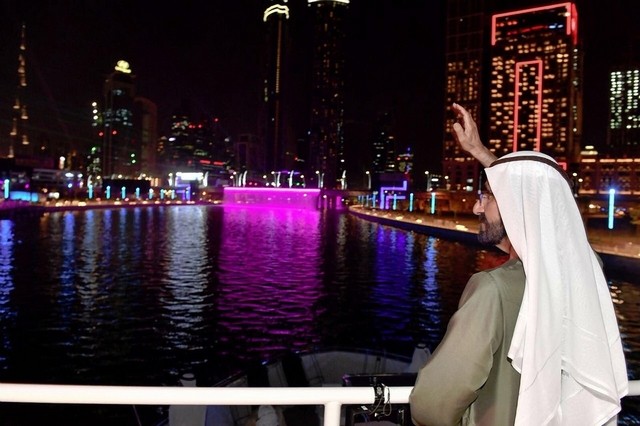 The canal connecting Dubai Creek with the Arabian Gulf is a new landmark in modern Dubai and will feature the UAE’s longest promendade.

Parts of Sheikh Zayed Road were closed yesterday as Dubai’s leaders gathered for the opening ceremony near Jumeirah Beach Park.

Speaking at the inauguration, Sheikh Mohammed said: “Every achievement and success that we celebrate motivates us to move ahead with confidence, determination and optimism. We are challenging ourselves to generate the best ideas and initiatives.

“Our progressive way of thinking, ambition and positive energy will bring happiness to the people and prosperity to the nation.”

The canal is six metres deep and 120m wide with five pedestrian bridges and 6.4km of waterfront.

Marine boat services operating from new stations throughout the canal and linking to Dubai Creek have now been started.

In 2013, Sheikh Mohammed said he hoped the canal would become the UAE’s “biggest landmark” and will come as part of Dubai’s aim to attract 20 million tourists to the country in 2020.

Earlier this week, the first picture of the newly-filled Canal from space was published by Dubai Media Office.