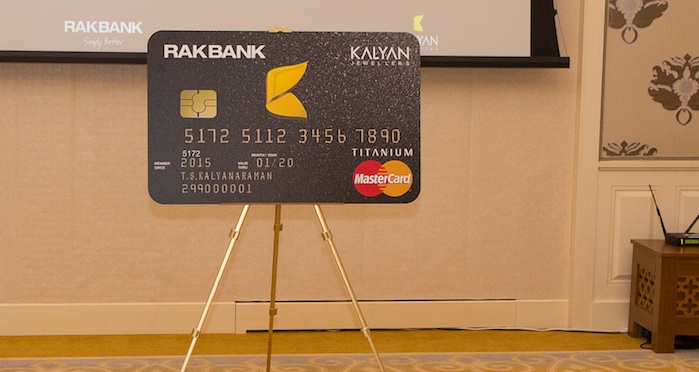 RAKBANK has partnered with India-based Kalyan Jewellers to launch a new co-branded credit card that offers users goldback for purchases.

The new MasterCard credit card will give customers ‘goldback’ loyalty points on all their shopping, done both locally and internationally, RAKBANK confirmed.

Customers using the card at Kalyan Jewellery outlets in India earn better returns – seven per cent – while purchases at Kalyan stores in the UAE earn 4.5 per cent and other local purchases reward three per cent goldback.

The loyalty points can be redeemed at any of the nine Kalyan Jewellers outlets in the UAE in the form of jewellery.

The card also offers a zero per cent easy payment plan on diamond and gold jewellery purchases valued at Dhs1,000 and higher at Kalyan stores in the country.

It is the first and only credit card to offer gold returns in the UAE, confirmed Peter England, RAKBANK CEO.

Users will also enjoy all the other benefits offered to RAKBANK titanium credit card holders such as free-for-life, travel and insurance benefits and lifestyle privileges, he said.

“Currently over 50 per cent of our credit card users are Indian and hence we have the right target market for this card,” said England.

“However, it is not just Indians we are targeting; we also have several Filipino customers, and they too enjoy buying gold,” he added.

RAKBANK, which has over 370,000 credit card users in the UAE with a marketshare of roughly 10-12 per cent, plans to release 10,000 of the new goldback credit cards this year.

“We may issue more, but I think this is a reasonable target,” said England.

With lending in the UAE picking up, banks in the country have been finding new and innovative means to boost their credit card customer base.

Last month, Al Hilal Bank launched a new ‘Laha’ scented credit card targeting female customers in the UAE. The card has a built-in applet that can absorb the scent of any perfume and also offers exclusive discounts from major women-oriented brands.

“My view is – co-branded cards have their place. I personally have not felt that generic football co-brands work particularly well. The partnerships are generally very expensive and the other partner tends to want a lot and is not prepared to offer too much other than their name,” England told Gulf Business on the sidelines of the launch event.

“The whole reason we liked to work with Kalyan is that this is a real partnership – both of us bringing value to each other rather than Kalyan just saying ‘you have our name and you do everything else.’

“Everyone has their own views and their own decisions that they think are right, but in my view, these kind of genuine partnerships are much more effective,” he added.