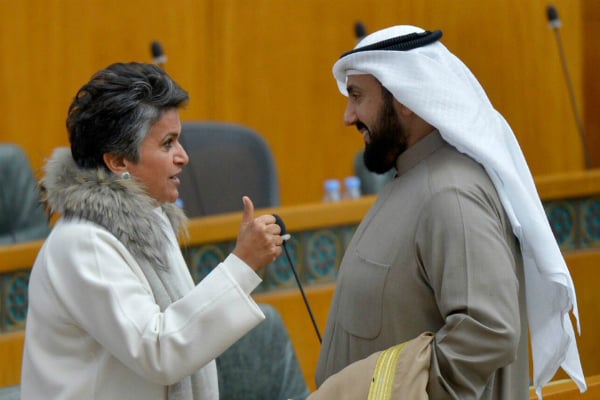 Kuwait MP Safa Al-Hashem has blamed expats for the country’s diplomatic spat with the Philippines over the treatment of workers and called for foreigners to be banned from hiring maids in the country.

Al-Hashem, the country’s only female MP, made the comments after the government of the Philippines said on Monday it would ban its citizens from being deployed for work in Kuwait after President Rodrigo Duterte highlighted a series of abuse cases.

On Friday, the Philippine premier held up pictures of the battered body of a 29-year-old Filipino domestic worker who had been found in the freezer of a Kuwait apartment and called for Philippine Airlines and Cebu Pacific to repatriate workers.

In comments published on Twitter in response to the spat, Al-Hashem called for the Kuwaiti government to stop sending aid to the Philippines.

“The government represented by the secretary of state should send a stronger message!! And stop the aid to the Philippines,” she said, adding the recruitment of domestic workers from other countries was open to Kuwaiti families.

The MP also called for the prevention of expats in the country from employing domestic helpers after it emerged a Lebanese man and his Syrian wife were the last renters of the apartment in which the body of Joanna Daniela Demaflis was found.

The body is reported to have remained in the freezer for more than a year after the two left Kuwait in November 2016 and was only discovered when police entered the apartment after a court order.

“I will propose a desire to prevent expatriates from recruiting for domestic workers! The tragedies are only from their bad dealings with the servants,” she said in comments translated from Arabic, adding that the freezer discovery was the “biggest example”.

The Philippine foreign affairs department said on Monday around 10,000 workers staying in Kuwait illegally are expected to leave under the country’s amnesty period running until February 22.

The ban is understood to affect workers that have secured employment in Kuwait but have yet to leave the Philippines but there was some confusion as to whether it would apply to workers with jobs in Kuwait that were home for holiday.

ABS CBN reported that 200 vacationing Filipinos were initially denied clearances when they tried to return to Kuwait on Monday but were later given permission to leave.

Bello had previously said that workers satisfied with their employment in Kuwait would not be forced to leave.

Al-Hashem on Sunday saw seen her proposal to charge foreign workers $3,300 for the issuance of driving licences rejected by a parliament committee.