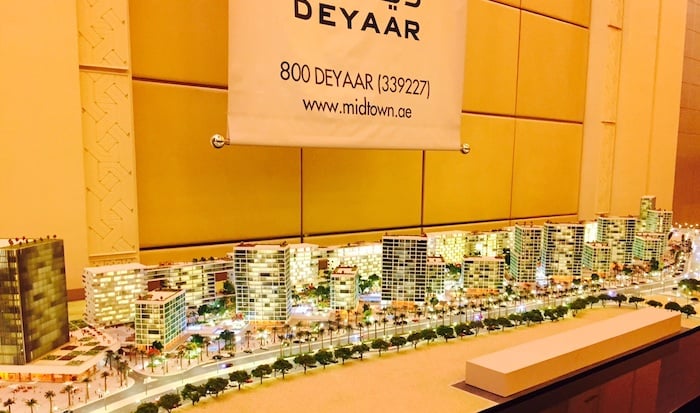 Dubai-based developer Deyaar has announced the launch of the first phase of its mega Midtown development at International Media Production Zone, with unit sales beginning next week.

It will also have a children’s playground, retail spaces, a fitness centre and 400,000 square feet of landscaped terrain.

While he refused to divulge details about the pricing, he said rates would be “reasonable and very affordable for the middle income segment.” He also said the company would offer relaxed payment options.

Construction is scheduled to begin in the last quarter of 2015 with the first phase slated for completion in September 2018.

The overall Midtown project, launched last year by Deyaar, will include 27 buildings in total, including 2,500 residential units, retail outlets, amenities such as clinics, swimming pools, tennis and basketball courts and one hotel.

Spread across five million sq ft, the development will also feature a one km-long green concourse. Deyaar has appointed Hyder as lead consultant and U+A Architects as the lead architect.

The project is estimated to cost between Dhs 2.5bn to Dhs 3bn, said Qatami. He also confirmed that Deyaar hopes to complete 90 per cent of the development by 2020.

“Infrastructure is already available on the master plan site and the land is also completely owned by us,” he said.

The company hopes to get bank financing for 30 per cent of the project and will mainly target Islamic and Sharia compliant lenders.

It will also retain 50 per cent of the residential units and all the retail spaces in Midtown, confirmed Qatami.

Regarding the hospitality unit, talks are currently on with a “well-known” international hotel operator, he told Gulf Business, but refused to reveal the name.

“We expect the Midtown development to offer strong returns to investors. At the current market rate, yields will be between 11 to 12 per cent and even if the market drops, they can expect at least 7 to 8 per cent,” he said.