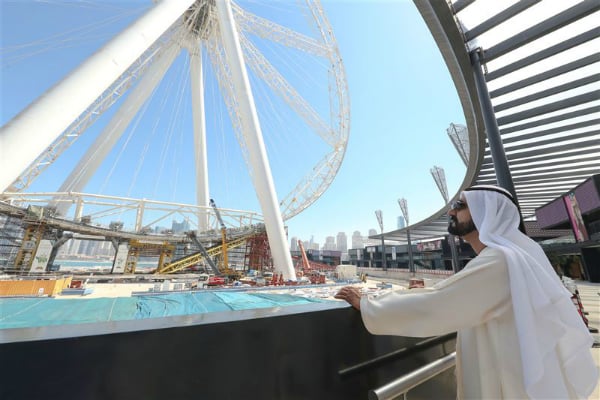 The addition would mean the site near Dubai’s Jumeirah Beach Residence breaks another world record, with it already set to host the world’s tallest and largest observation wheel- the 210m Ain Dubai.

It will be positioned on one of the legs of Ain Dubai and stand at a height of 150m.

“The rope climbing platform will offer a unique attraction for adventure seekers. Climbers will be supervised by experts to ensure safety,” the company said.

The island will be linked to the mainland via direct links from Sheikh Zayed Road, a driverless rapid transit service to Ibn Battuta Metro and a 265m pedestrian bridge from The Beach area.

No exact opening date for the island was given. Meraas said in March last year that 75 per cent of construction work had been finished and it would hand over the first residences by the end of March 2018.

During his visit to the site, Sheikh Mohammed said that it was critical to ensure that projects developed in Dubai and the UAE maintain the highest quality to enhance the country’s profile as an investment and tourism destination of choice.

“Creating a conducive environment for tourism and investment is key to the diversification of our economy. Equally important is having clear business plans and strategies to efficiently deal with changes taking place around us.”

He also said that ongoing projects will help create thousands of jobs and offer opportunities for the youth.

“Encouraging innovators and offering them opportunities are among our top priorities,” he added.