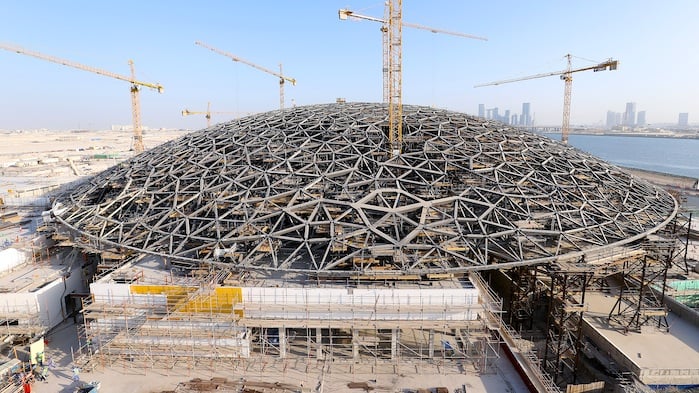 The concrete work has been almost completed, it said in a statement. A total of 34,000 tonnes of reinforcement steel has been used and over 21 million man-hours completed on-site.

The construction of the permanent gallery structures have been completed, along with the concrete work for the museum’s basement levels and the security screening facility – a secure seven-metre deep basement through which authorised vehicles will transport all the artwork of the museum.

Work is also progressing on the 1.2 kilometre Saadiyat Tunnel which will be the main entryway for the artworks as they are transported to their destination, the statement said.

TDIC also confirmed that the massive dome of Louvre Abu Dhabi has been successfully lifted and placed into its final position – sitting on top of the museum’s four main permanent piers.

The dome of the museum, weighing 7,000 tonnes and 180 metres wide, was constructed over 10 months. It was originally built on top of 120 temporary towers to support its weight during the construction process.

The lift process included raising the dome off the temporary towers and then lowering it 38 centimetres down to the permanent piers. Its lift is the first of its kind in the world of construction for a permanent structure of this scale and size, TDIC said.

Preparations included extensive testing of the bearings in the US, where it was proven the bearings can support the final weight of the dome.

The lift was done with 32 specially created hydraulic jacks that can hold up to 10,000 tonnes in weight and which were operated simultaneously and remotely.

Johann Sischka a board member of Waagner-Biro Stahlbau AG, the Austrian steel engineering organisation appointed to construct the dome, said: “The construction and sophistication of the Louvre Abu Dhabi’s dome is among the more unique projects we have undertaken.

“It is remarkable in its design and size, and given that it must be placed in precise spots on its four piers, there was no room for error.”

Designed by architect Jean Nouvel, Louvre Abu Dhabi, anticipated to be ready by December 2015, will encompass 9,200 square metres of art galleries including a 6,681 sqm Permanent Gallery and a 2,364 sqm Temporary Gallery.

Located in the Saadiyat Cultural District, it is one of the three main museums coming up on the island, with the other two including Zayed National Museum and Guggenheim Abu Dhabi.