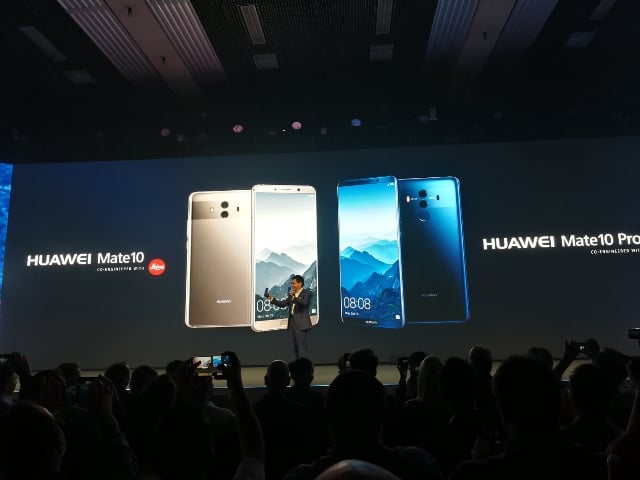 Chinese technology company Huawei has officially launched its new AI-powered smartphone the Mate 10 as it seeks to take further market share from rivals Apple and Samsung.

The new line is the first utilising the manufacturer’s Kirin 970 artificial intelligence chipset, claimed to make it quicker, more powerful and efficient than rival smartphones, and comes in normal, pro and Porsche Design variants featuring different display sizes and specifications.

All devices in the line include screen-to-body 2K displays seen in rival devices this year despite being smaller than their predecessors.

Other key features on all three include Google’s Android 8.0 operating system and the ability to connect to a PC or TV display to watch films or go through a PowerPoint presentation.

The pro variant comes with a six-inch screen, water and dust resistance, 4.5G capabilities, 128GB of storage and 6GB of RAM. It is priced at $942.

Meanwhile, the Porsche Design version features the same specs as the pro but a different user interface and ceramic-style physique. It comes with a leather case, two super charging plugs and 256GB of storage space. It is priced at $1,648.

Consumer Business Group CEO Richard Yu said the company chose not to use more powerful screen technology to save battery life and because users “cannot tell the difference” between full HD and 4K displays.

He said the company had also opted against facial recognition technology like that seen in Apple and Samsung’s latest devices because it had not yet reached maturity.

Counterpoint Research said in a September report that Huawei surpassed Apple in global smartphone sales consistently in June and July, with around 12 per cent market share.

The company has also gained ground in the Middle East and Africa in recent years and now stands second in the region behind Samsung with 13.8 per cent of the market, according to first half figures from research firm GFK.

However, none of the company’s devices were in the top 10 smartphones sold globally and Centrepoint has suggested it will need to trim its device lineup to see further gains.

The Mate 10 could be key to this process and will compete with the recently released Note8 and iPhone 8 from Samsung and Apple respectively.

A Middle East regional launch for the devices will be held at the end of October and they will hit stores in the UAE and Saudi Arabia next month.

Huawei also will expand its physical footprint of 50 service centres in the Middle East this month with the opening of a flagship store in Dubai Mall.

Several other stores are planned across the UAE in the months and years to come as the company seeks to get closer to regional consumers.