When we speak to Thomas Flohr, he hasn’t slept for 36 hours straight. The 61-year-old founder and chairman of Dubai-headquartered private aviation firm Vista Global Holding, has just finished competing at the 24 Hours of Le Mans – his team finished 11th, although they had a decent shot at the podium had it not been for a drive shaft that broke four hours before the end of the race. Still, for someone who has been on an octane-fuelled adrenaline rush for nearly two days, pushing the limits of a Ferrari without any sleep, he’s remarkably animated when talking about VistaJet. It is, after all, a company he started ground up back in 2004 and which has now grown into one of the world’s largest private jet companies.

In the nineties and early noughties, Flohr had a career in assets financing with no background in the private aviation business. He was accustomed to using private jets to be in multiple locations for several meetings a day, but in the process noticed two glaring inefficiencies: the underutilisation of corporate jets and the lack of a floating fleet infrastructure.

He asked his analyst to run the numbers, and what he saw was all the convincing he needed to start VistaJet. “The addressable market of corporate jets was 22,000. And the average utilisation of each is 250 hours per year. This is such an underutilisation…commercial airplanes are flying 4,000 hours per year.

“If we were to use these private jets for 1,000-1,500 hours per year, how would the price point look like for our clients compared to full aircraft ownership? If you utilise an asset four times as much as your competition – the competition being aircraft ownership by a corporation – you become so much more competitive,” says Flohr, who therefore positioned VistaJet as the ultimate challenger to corporate ownership of private jets.

Rather than a corporation spending tens of millions on a jet, and then idling it for nearly the entire year – besides having to deal with added pain points of maintenance, permits and crew – VistaJet entered the market promising an on-demand subscription service that would allow these high-flying execs to tap a jet service from anywhere to anywhere in the world.

The idea also grew on the back of a second inefficiency that Flohr saw two decades ago: the need for a floating fleet with no fixed home base. “What I needed to do was build a global infrastructure of identical airplanes on every continent in order to be a real competition to full aircraft ownership. If you own your plane, you can take it anywhere. If you enter into a subscription contract with us, you can have access to our airplanes anywhere around the globe, identical to aircraft ownership, but at a much lower price point, because we’re using the assets more.” 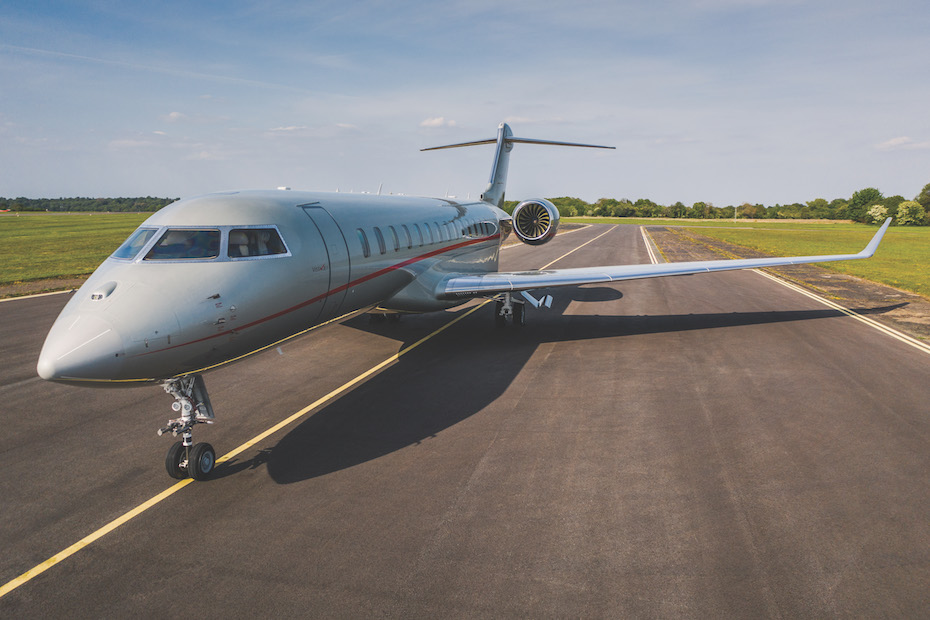 Vista has grown its own fleet size to around 180 planes – and expects to grow that number to 220-250 over the next 12-18 months – besides having a network alliance of 2,100 planes, which can be fully chartered or on which a customer can book a seat and share the journey with other passengers. Vista has made strategic acquisitions in the last few years which are now reaping rich rewards. It started with the acquisition of US-based on-demand private aviation company XOJET in 2018 on the back of a $200m funding that Vista received from Rhone Capital.

Flohr’s company followed that by acquiring JetSmarter the following year, which capitalised on JetSmarter’s technology platform to facilitate Uber-esque seat-sharing models. Vista also acquired Red Wing Aviation last year, just as the skies were beginning to reopen following the complete lockdown of international airspace routes for passenger flights during the height of the pandemic. “As we came out of the pandemic lockdowns in Q3 last year, we saw that there is a huge influx of new clients into the private jet market. What we saw is that the first step of someone coming from commercial is not taking a Global Express. They’re starting with smaller airplanes, and we did not have a light jet infrastructure. Red Wing was one of the leading light jet operators in the US. When we bought the company, it had 15 airplanes. We’re ending this year with 35,” explains Flohr on the reasoning behind the acquisition of Red Wing and also the rapid growth that its fleet has witnessed in a matter of months.

Apollo Jets was another big-ticket acquisition that Vista announced in March this year and it was positioned as Vista’s plan to tap into a global retail customer base. “With Apollo, it was a question of buy or build. And we felt that Apollo has about $250m revenue of retail business, and by buying the company we bought their salesforce and their customer base, and brought all their clients into our own business,” he says.

Furthermore, Vista also announced an aircraft management partnership with Talon Air, which was majority-owned by Apollo Jets, in a move designed to attract aircraft owners and offer them charter revenue while simultaneously managing their aircraft. “Some customers are deciding to own their own airplane and Talon is the business that operates airplanes. Talon manages the airplane, and with it, we can now offer clients whose aircraft we manage some charter revenue when they aren’t using their airplanes.”

Vista Global, which was set up in 2018 in Dubai’s DIFC, is the holding company that manages all of these sub-brands. Its decision to rapidly acquire expertise that would either be too costly or time-consuming to do it itself, has allowed Vista to accelerate its business performance over H1 2021. It recently confirmed that in the first six months of 2021, there was a 67 per cent increase in global flight hours across all of its brands. VistaJet reportedly sold over 8,000 new annual subscription hours, up 67 per cent over 2020, and if you thought that that was a pandemic-anomaly figure, remember that it was also up 41 per cent over 2019 levels. XO Deposit Members increased 82 per cent, with three times as many sales in the corresponding period of 2020. The group’s On Demand services recorded a year-on-year growth of 67 per cent across all markets.

But of all the global markets, the Middle East proved to be a bright spark for the region, witnessing an increase of 153 per cent in flight hours in H1 2021, significantly ahead of the 76 per cent growth in North America and 41 per cent in Europe. Dubai was Vista’s number one location for flights globally during H1 2021. Flohr attributes it to several reasons including the UAE’s decision to push forward with a business normalcy and continuity plan while reopening rapidly. The Middle East reportedly saw a 100 per cent year-on-year increase in the number of new VistaJet Program members between January and June 2021. The region saw some of the highest growth in terms of the number of all VistaJet flights, with Bahrain, UAE and Qatar showing triple-digit year-on-year growth of 283 per cent, 236 per cent and 231 per cent respectively.

Flohr, who has pursued several large acquisitions to diversify the reach of Vista, is also equally clear on the areas where he is not immediately looking to engage – specifically the construction of FBOs. “The infrastructure on the ground, the FBOs [in the Middle East] are second to none in the world. If you look at Al Bateen or Al Maktoum as ground stations, it is a client experience second to none in the world – and I think the western world has to catch up [in this area],” says Flohr. “However, when we speak to our clients, they tell us that the time they want to spend in the terminal is minimal. They would like ideally to go from their car straight to the airplane. So, the actual time spent in the FBOs is, in our opinion, limited and that’s why FBOs are not our strategic focus.” 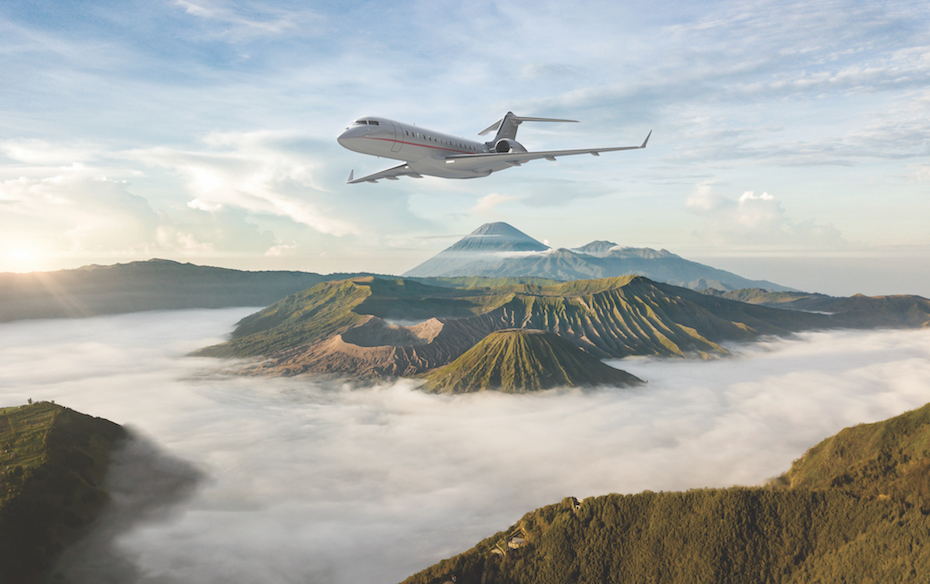 What is certainly a strategic focus area though for Vista, and a core one at that according to Flohr, is the issue of sustainability – a subject for which private aviation has come under a lot of heat. Vista, he says, is committed to becoming carbon neutral by 2025, 25 years ahead of the entire industry. And they’re taking the customer along for the journey. “When they sign a subscription contract with us, we have a serious conversation on their willingness to contribute to our sustainability programme. Ultimately, 87 per cent of them have decided, so far, to contribute to our activities. The sustainable fuel programme we have is probably the most promising real contribution. We are using the funds to pay more for that sustainable fuel. Unfortunately, not enough airports have sustainable fuel available today,” notes Flohr.

While it was corporate ownership of jets that Flohr eventually challenged with his business model a decade-and-a-half ago, he now has the high-spending segment of commercial airlines within his cross sights. VistaJet took delivery of two ultra-long-haul Global 7500 aircraft in April this year, with a total of 12 committed by the company, besides confirming an order for 10 Challenger 350 jets. “We waited 10 years for the Global 7500. The Middle East, with our 7500, is now connected non-stop to any point in the world, and that’s a big driver of growth for the region. Earlier, the advantage of flying commercial on an A380 was that you could fly straight to San Francisco or Australia – and prior to the 7500 you had to stop somewhere [with a private jet].”

Apart from connectivity, it is the customer base itself that is pushing the growth of private aviation in the midst of a pandemic. The number of touchpoints while flying private are believed to be 20, as opposed to 700 when flying commercial. “According to a McKinsey study done pre-pandemic, only 10 per cent of the corporations and individuals that could afford to fly private, flew private – the remaining 90 per cent of them flew commercial,” Flohr says outlining the potential of seizing this customer base.

“Also, on some routes, we think it’s more environmentally friendly to fly on an airplane with eight seats with a very small carbon footprint, compared to [commercial] airlines which have to fly to a remote location with only a 20 per cent load factor on that airplane.”

There is also the sheer economics of the seat-sharing facility which operators like Vista are now providing on private jets. With its JetSmarter acquisition, for example, Vista allows customers to crowdsource a flight through its app which has over two million downloads, thereby offering seats at reduced price points and with vetted members as companions on that journey.

Flohr’s research and insights has also thrown up another curveball which is expected to help private aviation further chip away at the business of commercial airlines. “Our intelligence tells us that a huge amount of the first-class capacity will be taken out of commercial airplanes. There will be a significant reduction [of first-class seats] on many routes, and even on the routes where they remain, there are going to be much fewer of them available,” says Flohr. As the experience of flying first on commercial goes down, the likelihood that these customers move to private jets, which are now offered at lower price points, increases significantly.

To make sure that its jets become a more inviting space for these spillover customers who are accustomed to the bells-and-whistles in first- and business-class cabins on commercial, Flohr says that Vista is now upgrading the cabin experience across its entire fleet. Commercial aviation, buckle up.

Dubai’s DXB to welcome 2.4 million passengers from June 24 until July 4

Dubai’s Emirates ramps up frequencies to Mexico with daily service