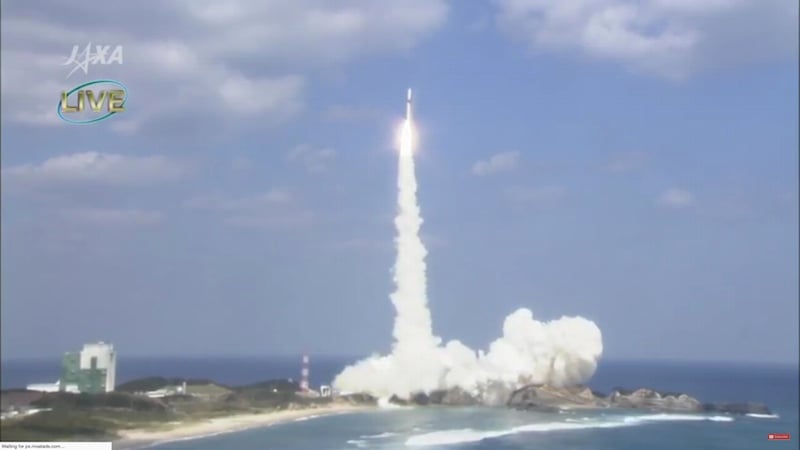 The first satellite made completely by Emirati engineers in the UAE, KhalifaSat, has successfully been launched into space.

It was launched shortly after 8am on Monday on board the H-IIA rocket from the Tanegashima Space Centre in Japan.

A team from the Mohammed bin Rashid Space Centre was at the launch site, while others watched the event live in Dubai.

The satellite was designed, tested, built and managed by Emirati engineers at the MBRSC’s Advanced Technology Laboratories, making it the first satellite to be developed in the facility.

It will be used to provide images of earth for practical applications in disaster relief management, urban planning and environmental protection, among other uses.

The rollout of H-IIA rocket that will be escorting #KhalifaSAT to orbit in few hours at Tanegashima Space Center in Japan.@MBRSpaceCentre pic.twitter.com/TAF0Lf5269

To mark the occasion, a special screening was also played on the facade of the Burj Khalifa on Sunday evening.

Few hours left for the launch of #KhalifaSAT! Watch the live streaming through the link https://t.co/cZL8szivFz pic.twitter.com/SuXJCmpH5e

The development of KhalifaSat began after UAE Vice President and Prime Minister and Ruler of Dubai Sheikh Mohammed bin Rashid launched the KhalifaSat project in December 2013.

In February, it was transported from Dubai to South Korea’s Incheon International Airport in anticipation of its launch.

The UAE Space Agency is planning to launch two satellites this year, the Dubai Media Office reported earlier this year.

A further two launches were planned over the next three years bringing the organisation’s total satellites to 12 by 2020.

The UAE has revealed a series of space projects as it prepares to send a probe to Mars by 2020.

In 2017, the country launched its first astronaut programme with the goal of sending four Emiratis into space in the next three years.

Two astronauts from the Emirati corps will be trained in Russia. One of them will be joining a crew of Russian commander and an American astronaut in Soyuz MS-12 spaceflight which is planned to launch to International Space Station (ISS) in April 2019.

In September last year, the UAE also revealed plans to build a Dhs500m simulation city on Earth to imitate a future project on the red planet it plans to build in 2117.

To mark the event, a video was played on the viant LED skin of Burj Khalifa, the world’s tallest tower at 828 meters, on Sunday night.