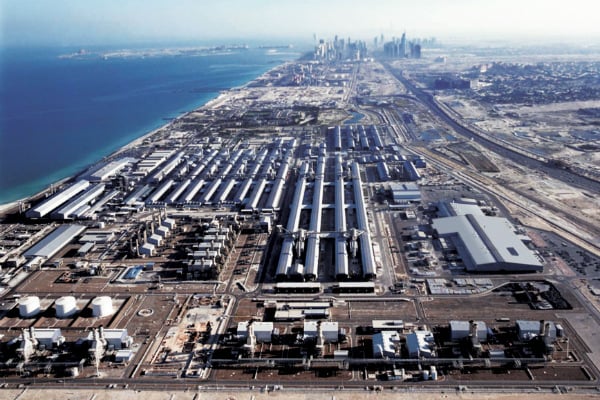 The UAE’s Mubadala and Dubal Holding have signed an agreement worth over Dhs1bn with Emirates Global Aluminium (EGA), to develop a new power and water desalination plant at EGA’s smelter in Dubai’s Jebel Ali.

Mubadala and Dubal Holding will establish a joint venture to develop the new facilities, a statement said.

The joint venture will install a combined cycle power facility at EGA’s Jebel Ali site capable of generating over 600 megawatts of electricity.

Once the project is complete, five older, smaller and less efficient turbines at EGA Jebel Ali will be put on standby for use only in emergencies.

Khaled Al Qubaisi, CEO Aerospace, Renewables and ICT, Mubadala, said: “This project creates an attractive opportunity for Mubadala to add to its portfolio of investments in power generation and utilities in the UAE and internationally.

“For EGA, structuring this project on the Independent Power Producer (IPP) model provides certainty on power prices for decades ahead while preserving capital for other opportunities.”

Saeed Mohammed Al Tayer, vice chairman of Dubal Holding and vice chairman of EGA, added: “Our project includes a combined cycle power facility and a reverse osmosis water desalination plant that support the objectives of the UAE Vision 2021 and the UAE Centennial 2071, which outlines the path for a brighter future for generations to come.”

EGA requires electricity for aluminium smelting and other industrial operations. It runs captive power plants at its sites in Jebel Ali and Al Taweelah with a current combined generating capacity of 5,450 megawatts, making the company the largest power producer in the UAE after DEWA and ADWEA.

The new power facility is expected to reduce greenhouse gas emissions from EGA’s power generation at Jebel Ali by some 10 per cent, the statement said.

Emissions reductions per tonne of aluminium produced at Jebel Ali, which includes both power generation and aluminium smelting, are expected to be up to 7 per cent.

The facility will also improve the efficiency of power for EGA’s aluminium smelting, and reduce natural gas consumption, the statement added.