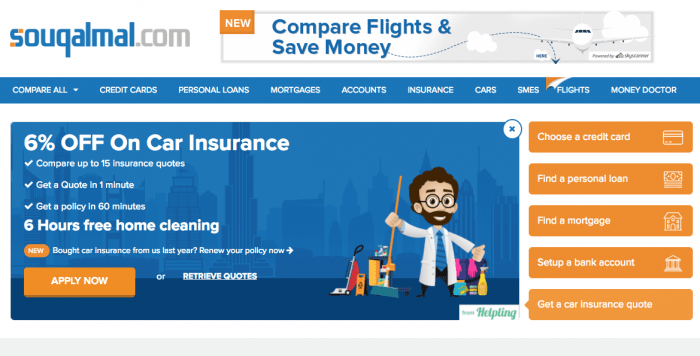 UAE-based comparison site Souqalmal.com has raised $10m in a series B investment round.

The round was led by the SAR500m ($133.3m) Saudi-based Riyadh TAQNIA Fund and saw participation from UK comparison site GoCompare in its first international investment and UAE Exchange Group.

Souqalmal said it would use the proceeds to launch new business lines including for health, travel and home insurance, develop its technology platform and invest in marketing.

The company currently offers comparisons of 3,200 banking, insurance and education products in the UAE and Saudi Arabia.

It plans to officially launch its car insurance comparison platform in Saudi Arabia through a broker in the next few months after launching the category in the UAE in June last year and seeing 800 per cent growth.

CEO and founder Ambareen Musa said the company had seen revenue growth of 300 per cent annually since launching in 2012 and had cut its customer acquisition cost by 80 per cent.

Beyond Saudi Arabia the firm also plans to expand its presence in the wider Gulf region beginning with Bahrain, she told Gulf Business, but the company will do so gradually.

“The idea is to really become the MENA player but what we want to do is start with GCC player first and then actually go into North Africa,” she said.

The investment round follows a recent trend of international players investing in regional companies including US online shopping giant Amazon’s estimated $650m acquisition of Souq.com and China’s Didi Chuxing’s investment in Careem.

“Instead of trying to do it on their own they are starting to see the talent is there, the infrastructure is there and we’re attracting a lot of international players,” Musa added.

GoCompare chief strategy and investment officer Faisal Galaria said the company would seek to pass on its expertise in marketing, customer acquisition, relationships and technology to support Souqalmal to “become as dominant here as we are in UK”.

“We look at the size of the opportunity here in the GCC market and clearly it’s a moment in time when the market is set to explode especially given what’s happening in Saudi Arabia so it seemed like an opportune moment for us to make our first international investment,” he said.

Promoth Manghat, the CEO of UAE Exchange, said the investment fell within the $250m to $300m sum the firm had announced for investments to increase its global market share.

Read: UAE Exchange Group targets up to $300m in acquisitions

“We see that the value chain of offering at this point of time is limited and we could definitely extend that through Souqalmal,” he told Gulf Business.

“You cannot have a strategy of serving the customer through one single channel, you need to have a multichannel strategy and that’s what the marketplace brings you.”

Souqalmal competes with Dubai-based comparison site compareit4me, which itself raised $3.5m in a funding round in May led by STC Ventures and Wamda Capital

Musa said the market had consolidated from an initial seven players when the company first started to now only two, but the presence of other players was also important for educating consumers about aggregator sites.

“From an individual perspective, it’s who builds the best trust and the most branding and that’s more on the business side, but I think overarching with that it’s very important to have more than one player,” she said.