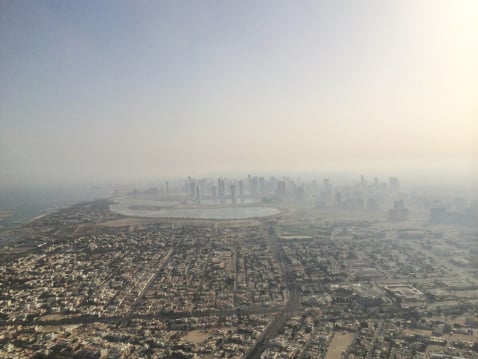 The United Arab Emirates has emerged as the most polluted country when looking at the volume of small particulate matter in the air, according to the latest report compiled by The World Bank.

The annual report found that the UAE had the world’s highest exposure to its newly introduced PM 2.5 criteria, which measures tiny airborne pollutants smaller than 2.5 microns.

The UAE’s PM 2.5 level stood at 80 micrograms per cubic meter, beating even countries such as China (73 micrograms) and India (32 micrograms).

It was also dangerously higher than the World Health Organisation’s air quality guideline of 10 micrograms per cubic meter.

The report warned that pollution caused by these tiny particles is extremely dangerous and can result in premature death. The fine particles of sand, dust and chemicals can deeply penetrate into the respiratory tract and also cause health damage.

This presents a cost to the economy in the form of health impacts such as death and disability, the report added.

The data also showed that in many parts of the world, exposure to air pollution is increasing at an alarming rate and has become the main environmental threat to health.

In 2010, almost 84 per cent of the world’s population lived in areas where ambient concentrations of PM 2.5 exceeded the WHO guideline.

Productivity losses in the global labour force due to death and disability from air pollution also totalled more than $161bn in 2010, the report stated.

It urged countries to invest urgently in air quality management.