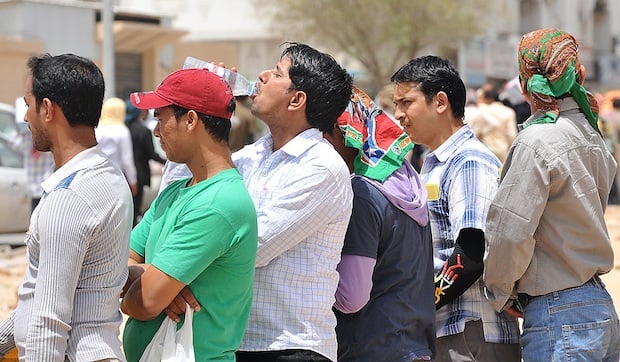 Thousands of illegal foreign workers and visa violators have taken part in a last minute rush to leave Saudi Arabia as the kingdom’s amnesty period comes to a close.

The amnesty, which began on March 29, allows foreigners staying in the kingdom illegally to leave without penalty provided there are no criminal cases against them. They can also return legally at a later date as their fingerprints will not be registered.

The initial 90-day period was later extended by one month to allow more workers to participate, with an official deadline of July 25.

Saudi Gazette reports that huge crowds were seen at deportation centres across the kingdom on Sunday.

Sources told the publication 7,421 Indonesians had left the kingdom by registering at the consulate in Jeddah, three times less than during a 2013 amnesty. A total of 13,000 registered in Jeddah and Riyadh combined.

However, the country’s vice consul for information, social and cultural affairs, Umar Badarsyah, said many more were expecting the amnesty period to be extended to cover the upcoming Haj pilgrimage, when they hoped to make more money.

This added to 46,000 Sudanese nationals, 75,000 Pakistani nationals and 31,000 Indian nationals that applied across the kingdom, according to the publication.

A further 50,000 Bangladeshi nationals also intend to depart, with 45,000 able to complete exit procedures and 20,000 having already left, it said.

Following the end of the amnesty, Saudi authorities are expected to begin a crackdown on illegal foreign workers.