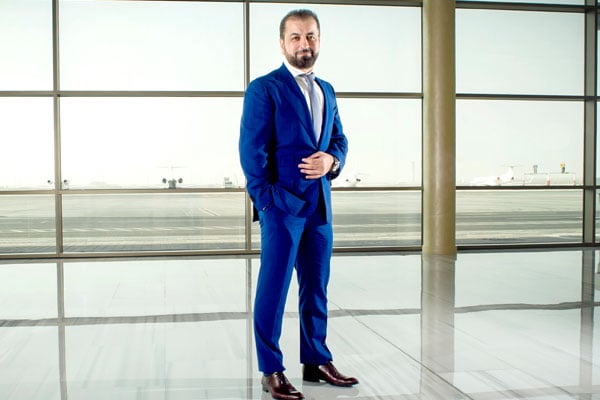 “I was a driver in Damascus taking the crew between the aircraft and the terminal. The crew were always complaining about the facilities, lounges and service levels in the lounges at the airport,” explains Adel Mardini – now the CEO and president of Dubai-headquartered Jetex Flight Support – of his early days when his only connection to aviation was ferrying flight staff.

That bickering by the crew meant that Mardini struck upon one of those life-changing epiphanies, deciding to set up high-quality terminals for passengers and crew of private aircraft. He borrowed money to start up his own business and Jetex Flight Support was established in 2005.

Based in the UAE, the company was launched at the Dubai Airshow that year. At the event, Mardini went all out, from flags to billboards to sponsorships to make sure that the bright orange branding of his company disrupted the muted sea of greys and blacks chosen by traditional players. While Jetex began by building flight plans and offering ground support to private jet flights, Mardini set upon building the company’s first private jet terminal – fixed base operator (FBO) in aviation speak – at Paris Le Bourget Airport. 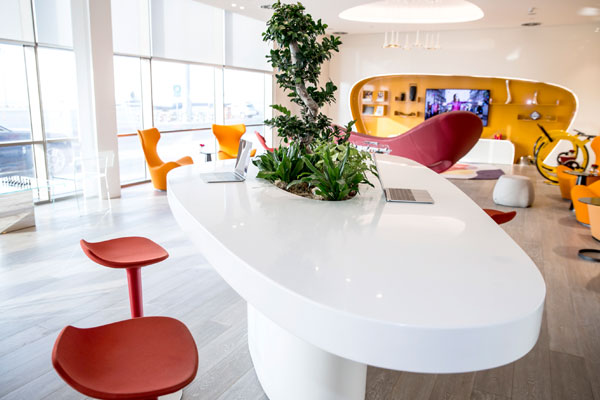 “There are only two companies in the world doing FBOs, logistics and flight support – and we are one of them,” he says.

“Starting from 2005, it took us four years to build our first terminal. We spent that time building our platform, the network, the connections and the slots we required to set up such a business.”

Jetex’s idea was to upend that traditional model and create luxurious terminals.

“We don’t want the journey through the terminal to their aircraft to be something of a disconnect from the service levels of luxury that they’re otherwise used to.”

That vision led Mardini to launch Jetex’s flagship VIP terminal at Dubai’s Al Maktoum International Airport in 2013, followed by the expansion of the VIP terminal last year. Of the 1,600-square- metre space in the Jetex FBO in Dubai, 1,000sqm are dedicated to passengers and 600sqm for crewmembers.

For those in a hurry, Jetex’s team can get them from the door of the terminal to the aircraft in just seven minutes – with the last leg from the gate to the aircraft serviced by their own Rolls-Royce car.

Enter the terminal and you’ll catch sight of a glass-top piano, home-theatre-sized high-definition screens, a cigar lounge, recreational areas with a foosball table, nap pods, a fully-kitted out large conference room for last-minute meetings before taking-off and even a dedicated area for passengers to indulge in some retail therapy before they embark on their flight.

Choosing Dubai South as the location for this operation was a strategic choice says Mardini.

“The plan is that over the next two- to-three years, nearly 90 per cent of all of Dubai’s private jet flights will operate out of Al Maktoum Airport where they won’t need a slot to take off and land as opposed to Dubai International Airport [DXB] where you have to queue up due to several international commercial airlines flying in and out.” 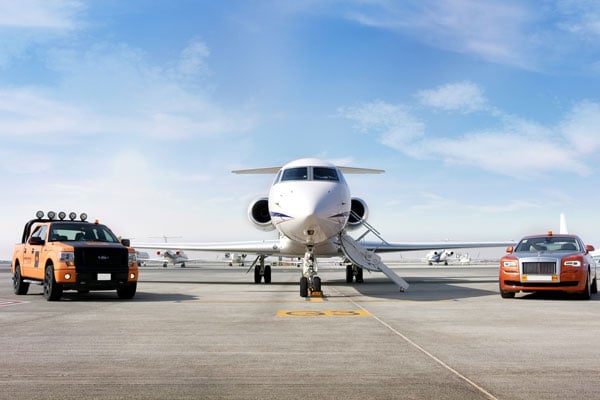 When considering the model of a Jetex FBO, Mardini turned to the hospitality industry for inspiration.

“When you go to any five-star hotel, you’d spend at least a few minutes within the lobby. This is what we want to achieve with our FBOs. We want passengers to spend a few minutes here before we drive them out to their aircraft.

“The process of dealing with our customers is like the one hotels follow when guiding passengers to their room in a five-star hotel. Just as you would find in a hotel lobby, our FBOs too have a reception team, a concierge team and a guest experience team too.”

The hospitality industry, in turn, is also looking keenly at the FBO model. For example, last year Hilton opened its first hotel inside an FBO on St Simons Island in Georgia.

“The Four Seasons have partnered with NetJets to send their customers on a private jet tour aboard a big aircraft like a 757. Ritz- Carlton and Peninsula too are planning private jet tours,” Mardini explains.

A logical extension for these big-ticket hotel chains might then be to set up their own FBOs to support their jet tours.

Creating the hotel-esque FBO like Jetex has done means an enviable business model that can then, much like a five-star hotel chain, be franchised out as well. And as the CEO explains, Jetex has rapidly grown to now include 29 locations around the world, 14 of which are franchised while the rest are directly owned and operated by Jetex.

“We offer logistics and support for flight operations around the world, irrespective of whether Jetex has a presence on the ground or not in that respective country. Where we don’t have a Jetex presence on the ground, we have affiliates, partners and agents. So if you ask for flight services to LA or New York or Cuba for example, where we don’t have our own teams, we can still offer it.”

Worldwide, Jetex has more than  400 employees, and there are three  global operational hubs – the flagship headquarters in Dubai, another centre  in Miami to cover the North and South American markets and one more in Beijing to service mainland China.

The GCC market remains a particularly lucrative one for Jetex and one in which it is expanding its private jet footprint. “When we say GCC, we speak mainly about the Saudi Arabian and UAE markets because these are the most active in the GCC. Saudi Arabia is still the biggest market and the airports in Riyadh and Jeddah are expanding. There is activity in other GCC markets too, like Oman where a new airport has recently opened in Muscat.

“We can see stability in the market here. With a correction in the oil market and current prices somewhere between $75 and $80 a barrel, people are once again beginning to use private jets and flying more.”

While the private jet business in the GCC is growing, Mardini offers a perspective on how the region’s private jet industry stacks up against the undisputed market leader.

Recently, the private jet industry in the UAE received a major fillip due to an announcement by the Executive Council of Dubai waiving up to 19 fees imposed on the aviation sector.

“The impact of these economic reforms is very positive and will stimulate business volumes. We owe it to Dubai for their facilities and support from officials from the government and civil aviation authority,” Mardini says.

The luxury FBO model also means that these terminals now attract a large swathe of leisure travellers. Jetex has expanded its services beyond flight support and trip planning, to now offer leisure travellers bespoke concierge services. From front-row seats at a fashion show, to all-access passes at the next F1 race, Jetex’s concierge team can make it happen.

“We had one American client who asked for a villa in Greece, helicopter service, butlers, cars and security in an all in one package – and we delivered all of it,” says Mardini.

Jetex’s latest venture is to branch out and become an aircraft dealer. The company has recently signed a deal with HondaJet to sell and maintain aircraft, offer aftersales support and service nearby markets like Pakistan.

“This is a big advantage for us. We started out as a flight support broker that offered logistics support and then moved to FBO and now have expanded even beyond that. 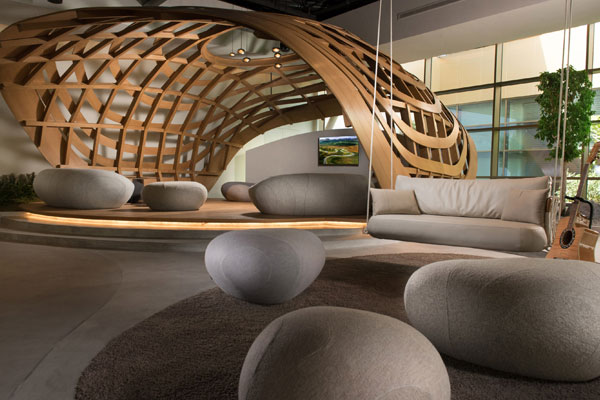 “HondaJet is a good product for businessmen in the region who want to fly their own jet from say Dubai to Riyadh, or Jeddah to Dubai. Since we announced the partnership we already have six interested buyers,” says Mardini of the $5m, six-seater jet, the second cheapest private jet in the world and the first private Japanese aircraft manufactured since the end of WWII.

With one finger firmly on the pulse of the future of aviation, Jetex has also recently signed a deal to cooperate with US-based Wright Electric in building the first electric private jet. Jetex will be providing the ground infrastructure to support electric aircraft by setting up charging stations in Dubai and Muscat to begin with, followed by other destinations like Morocco and Spain. These electric jets will have an estimated range of 540km initially and could reach nearly 900km in the future.

Beyond this, the future expansion plans for the business are equally ambitious. By 2020, it aims to have a network of 50 FBOs all over the world.

“We are focusing on the US market, we also believe that there will be big potential in the UK market, especially with Brexit. We have already signed up Abidjan in the Côte d’Ivoire and are targeting locations such as Thailand, Indonesia and Myanmar.”

While Jetex is breaking new frontiers by setting up the first private jet terminal  in locations like Guarulhos Airport in Sao Paulo, its expansion plans are influenced by the relationships that governments share too.

“I can see potential in Russia and Kazakhstan, especially after the visit of [Abu Dhabi Crown Prince] Sheikh Mohammed bin Zayed to Kazakhstan. We are always looking at the vision of the government and the countries they want to strengthen their relationship with.”

Mardini is also now looking at the digitisation of the business. “We have our own systems in place as part of this digital integration. We are nearly ready to release our latest app, which allows operators of private jets to schedule bookings, make changes and coordinate with the Jetex team.”

The digitisation-push also includes measures like an e-luggage tag system to keep track of bags.

Along with the evolution of Jetex from flight operator to FBO constructor, to concierge service provider and now aircraft dealer, Mardini has seen an equally seismic change in the way he conducts business.

“I now have more business direction than I did before. Earlier, I was an operations person, but now I see myself more as a strategic planner.

“It has been a long journey from where I started out as a driver. Now, I’m driving the company.”