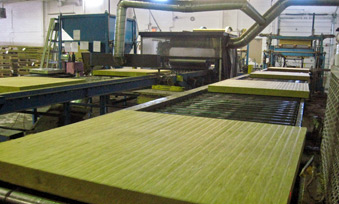 A joint venture between Kuwait-based Alghanim Industries and Saint-Gobain has announced plans to build a stone-wool plant at Yanbu in Saudi Arabia to produce insulation materials.

Saudi International Insulation Manufacturing Company (SIIMCO) has signed an agreement with the Yanbu Royal Commission to lease a 65,000 square metre site at Yanbu Al-Sinaiyah for 30 years to build the factory.

The plant, estimated to cost roughly 45 million euros ($58 million), will use Saint-Gobain’s proprietary technology to produce stone wool, an insulation component in the construction industry.

Construction is expected to begin in August 2013 and the factory is planned to be operational by early 2014, SIIMCO said in a statement.

When completed, the plant will employ around 200 people and have the annual capacity to produce 60,000MT of stone-wool, thermal and acoustical insulation materials in the form of slabs, rolls, stitched mats, and preformed pipe insulation.

The announcement follows a “comprehensive review” of the environmental impact and approval for plant layouts, building structure and utilities from the Yanbu local authorities, the statement added.

Omar Alghanim, CEO of Alghanim Industries, said: “Our joint venture investment at Yanbu will supply local and regional industrial and building areas and will assist in improving the fire safety of buildings.”

Saudi Arabia’s construction industry is witnessing stellar growth; the Kingdom currently has a construction project pipeline of around SAR375 billion, according to reports, and the sector is projected to generate investments worth SAR16.125 trillion by 2020.

The Saudi government alone has announced plans to invest over SAR1.4 trillion in social and economic infrastructure by 2014, with housing projects and educational institutions accounting for a large chunk of the total spend.