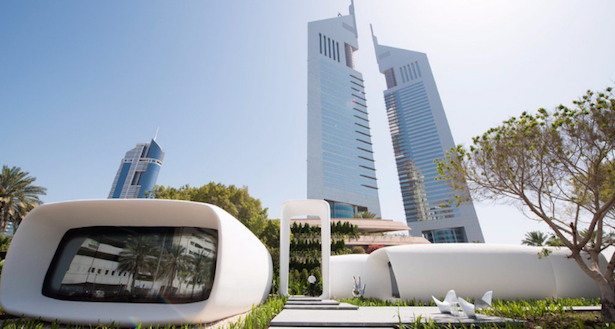 The world’s first 3D printed office was opened in Dubai on Monday by the Vice President and Prime Minister of the United Arab Emirates and Dubai’s ruler His Highness Sheikh Mohammed bin Rashid Al Maktoum.

Called the ‘Office of the Future’, the building is located in the Emirates Towers premises and will house the temporary office of the Dubai Future Foundation.

Spread across 250 square metres, the building was constructed using a special mixture of cement and a set of building materials designed and made in the UAE and the United States.

These materials underwent tests in both China and the United Kingdom to ensure their reliability, official news agency WAM reported.

The office building has been prepared for actual use and 3D printing technologies will offer services such as electricity, water, telecommunications and air-conditioning, official news agency WAM reported.

The building also incorporates energy efficient measures. Its arc shape was adopted for safety purposes and to ensure the stability of the building, the report added.

Sheikh Mohammed said: “We announce the opening of the first 3D-printed office in the world, after less than a month of launching the Dubai 3D printing strategy which showcases a modern model of construction.

“This is an experience we present to the world on implementing future technology in our lives, and it represents a new milestone for the UAE as a global leader in strategic achievements.”

He added: “We see this project as a case study that will benefit regulators as well as research and development centres at the regional and international levels on real application of 3D printing technology. We are documenting this experience and building on it to take advantage of the most important lessons, which will serve as reference points to take this technology to new levels.”

A 3D printer measuring 20 feet high, 120 feet long and 40 feet wide was used to print the building. The printer features an automated robotic arm to implement the process.

The full model took 17 days to print after which the internal and external designs were developed. The office was installed on site within two days.

The labour involved in the printing process included one staff to monitor the function of the printer, a group of seven people to install the building components on site, and a team of 10 electricians and specialists to take care of the mechanical and electrical aspects.

Hence the labour cost was “cut by more than 50 per cent” compared to conventional buildings of similar size, WAM reported.

The initiative comes as part of Dubai’s 3D printing strategy which seeks to promote the emirate as a global hub of 3D printing by 2030. The strategy focuses on three main sectors: construction, medical products, and consumer products.

Sheikh Mohammed added: “We implement what we plan, and we pursue actions not theories. The rapidly changing world requires us to accelerate our pace of development, for history does not recognise our plans but our achievements.”