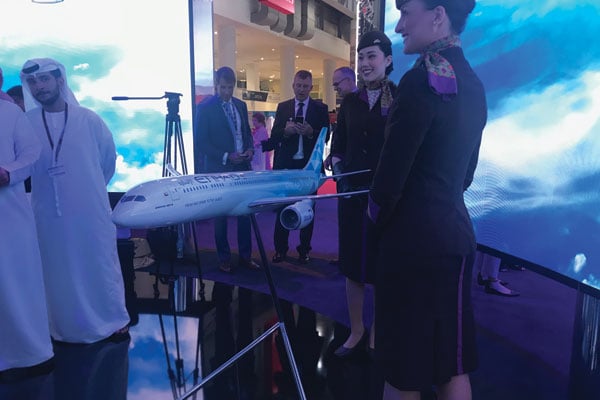 Abu Dhabi’s Etihad Airways has teamed up Boeing to test a new “sustainable” flight using a 787 Dreamliner, it was announced on Monday.

The special ‘Greenliner’ flight, which will initially be deployed to Brussels in January next year, will serve as a “flying laboratory for testing procedures and initiatives that could further reduce fuel consumption and carbon emissions”, officials said.

Some of the elements that will be tested include fuel – with the use of bio-fuel from ADNOC likely to be trialed – as well as lighter alternatives to plastic cutlery on board.

“Fuel accounts for 25 per cent of our operating costs and reducing fuel burn has a direct impact – both financially and by reducing the CO2 emissions. We are anticipating an improvement in fuel burn of over 20 per cent, which will greatly increase efficiency,” said Tony Douglas, CEO of Etihad.

The specially-themed 787 will be used to also operate regular flights in Etihad Airways’ network, while periodically serving as a test bed for assessing environmental sustainability initiatives.

Beyond the environmental testing on the airplane, the two companies will build on the technical capabilities that Etihad has developed while maintaining its own Dreamliner fleet and that of other operators, the statement said.

As part of the partnership, the companies are discussing several areas where they can work together to improve operational efficiency.

The agreements also include a customised material parts package and three Quick Engine Change (QEC) kits that enable Etihad to quickly return an airplane to service if an engine needs to be repaired or replaced.

Etihad currently has 36 Boeing 787 jets (37 next week), which account for about one-third of its total fleet. The number of 787s is expected to rise to account for 50 per cent of Etihad’s total fleet by 2023.

Stan Deal, president and CEO of Boeing Commercial Airplanes added: “We look forward to continuing our collaboration with Etihad Airways to identify more opportunities to improve efficiency across commercial aviation.”