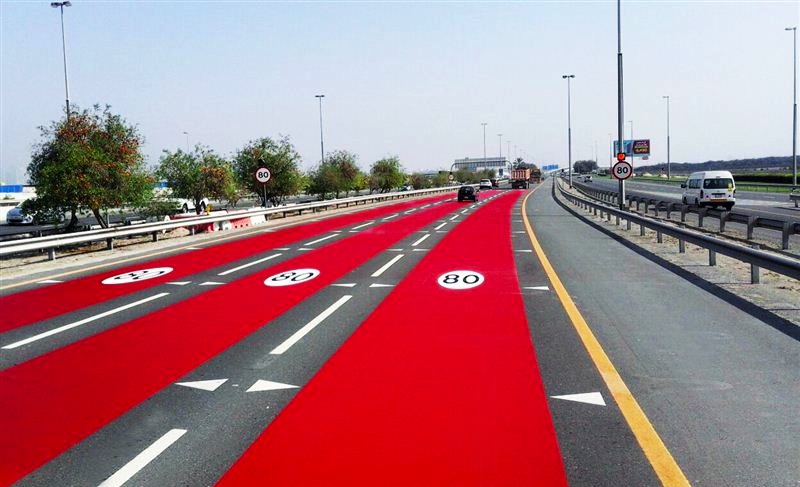 Dubai’s Roads and Transport Authority (RTA) has started painting certain roads red in colour to indicate a drop in speed limit to drivers.

The move is being carried out on an experimental basis on the Oud Metha Street (near Bu Kadrah Interchange) along the extension of Dubai-Al Ain Street, where the maximum speed limit has been reduced from 100 km/h to 80 km/h.

As part of the initiative, the vehicle lanes have been painted red, with triangular markings on both sides of the lane dividers displaying the speed limit. The RTA hopes the move will intensify the cautionary signs for reducing the speed on the road.

Maitha bin Adai, CEO of RTA’s Traffic and Roads Agency, said: “The process involved colouring all lanes in an eye-catching style such that the step would help in inviting the attention of road users to the new speed limit.

“The proposal had been developed for colouring asphalt in red at a distance sufficient for motorists to lower their speed gradually without obliging them to apply brakes suddenly. We anticipate this course of action would contribute to cutting the number of successive accidents. Similar actions taken previously had contributed to reducing the number of traffic deaths on key streets and highways witnessing the largest traffic accidents in the emirate.

“Asphalt colouring would be implemented in phases at locations subject to speed change in some other vital roads in the emirate of Dubai in a gradual timeframe. Therefore, we expect motorists to get used to it for their own safety, and avoid offences and accidents resulting from overspeeding,” he added.

According to bin Adai, the initiative will next be implemented on Sheikh Zayed Road near the 5th Interchange where speed is set to be reduced from 120 km/h to 100 km/h.

It will also be applied to the Jebel Ali-Lehbab Road near Lehbab where the limit is being cut from 120 km/h to 100 km/h.

“The experiment would be evaluated to verify its impacts on drivers’ attitudes. It is expected that the procedure would significantly increase compliance with specified speeds and avoid potential accidents,” he said.

“The various development projects launched and implemented by RTA since inception have contributed effectively to decreasing the number of traffic accidents deaths by as much as 50 per cent. Traffic fatalities came down from 332 in 2006 to 166 in 2015, and mortality rate went down from 21.7 deaths per 100,000 peoples in 2006 to 3.5 per 100,000 peoples in 2016. These statistics have placed Dubai among the top five cities in the world in the traffic safety,” explained bin Adai.

The RTA is currently undertaking new plans for traffic safety covering drivers, vehicles and roads. The authority has already taken steps to reduce the speed limits of roads that witness elevated traffic volumes.

“As excessive speed causes 80 per cent of severe traffic accidents, associated factors were examined as well. So a study was commissioned for improving the locations witnessing speed reduction to alert drivers to be more attentive and reduce their speed to match the engineering design of the road, and avoid being caught by radars,” said bin Adai.

He urged motorists to observe the new road markings and adhere to the specified speed limits to ensure their safety.