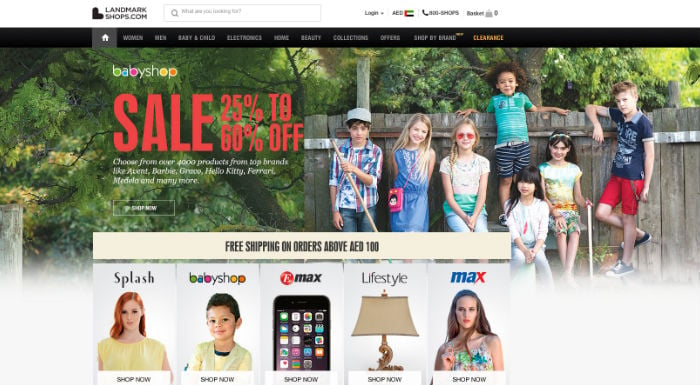 LandmarkShops.com, the online arm of Dubai-based retailer Landmark Group, hopes to double sales in its next fiscal year 2015-2016, it announced on Thursday.

The company posted a revenue growth of over 200 per cent in the fiscal year ended 2014-2015, said Savitar Jagtiani, business head, e-commerce at LandmarkShops.com.

He declined to provide actual sales or revenue figures and the number of users that the site currently attracts, but said all the three were on the rise.

The site, launched in December 2012, currently showcases 30,000 products from five of Landmark’s 14 businesses, including Splash, Babyshop, Emax, Lifestyle and Max.

Two more brands are set to be added within the next two and half months, said Jagtiani, but did not reveal further details.

Some of the other businesses within the group include Home Centre, SportsOne and Shoe Mart, and Jagtiani confirmed that the company aims to bring all of them on the site soon.

“Most of our businesses will be online in the next financial year,” he told Gulf Business on the sidelines of the event.

“It took us 26 months from the launch of LandmarkShops.com to bring in Lifestyle, but 45 days later Max was online. That’s because we made improvements in the system, process, operations, technology and resources – all of which gives us speed to grow faster,” he said.

“We do want to bring the rest of our businesses online as fast as we can, but we need to balance the speed and accuracy – if we are going to bring a new business – we have to ensure that we deliver right customer experience,” he added.

The website is currently operational only in the UAE, but Jagtiani says plans are on to expand geographically.

“I think in this next financial year, from a multi-territory point of view, we are going to see more focus and as and when we are ready we will expand into either those markets where we already have a physical presence or the markets of interest,” he explained.

The Landmark group has a physical presence in several markets across the Middle East, Africa and Asia.

Several traditional retailers in the region are gradually looking to tap into the growing e-commerce industry.

The UAE’s e-commerce market has been growing at around 38 per cent annually since 2009, and is currently poised to reach around $2 billion, according to e-commerce site JadoPado.

With a penetration of six per cent, it has grown up to eight times as quickly as the traditional retail industry.

The booming sector has attracted a huge number of independent players, with forerunners such as Souq.com, Cobone.com and MarkVIP posting strong sales and revenues.

Jagtiani admits that competition is stiff within the e-commerce space, but says LandmarkShops.com will stand out because of factors such as better customer experience, loyal customers to the group – reinforced through its Shukran programme, and its omni-channel offering, which will allow users to buy/book online but pick-up/return products at the physical stores.

Currently, 63 per cent of the total shoppers on LandmarkShops.com are Shukran members.

Going ahead, Jagtiani admits its is going to take time for the venture to make a noticeable impact on the sales of its parent group. “But we are in it for the long-run. It is only early days now – we are the youngest in the group – so we have got a lot of growing to do,” he said.