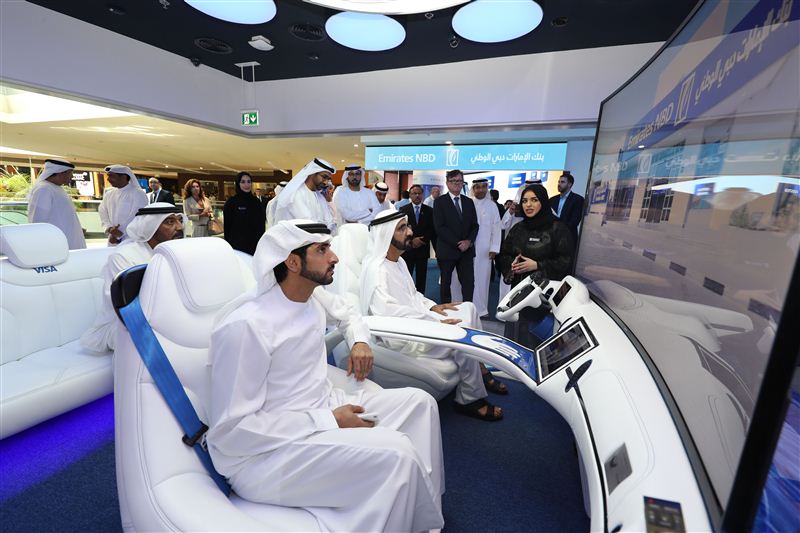 The scheme pairs government departments with innovative companies to find solutions to challenges of the 21st century and is headquartered in a 22,000-square-foot building.

Inside eight accelerators working in collaboration with government departments will focus on the education, health, infrastructure, transportation, security, energy and finance sectors.

Thirty companies from the 2,274 applicants have been selected to participate in the programme.

Among them, UAE cyber security firm Dark Matter identified today said it been chosen to help Dubai Police use big data analytics as a tool to help solve crime.

The headquarters features offices, conference rooms communal workspace, specialised labs and halls for events and workshops. The building also includes the first branch outside the US of the 1776 Startup Incubator, offering training and investment opportunities to entrepreneurs.

Those selected for the programme, which began on September 18, have three months to come up with a prototype or business plan that can be applied to the entire city. After this government entities and investors will be allowed to invest in the winning projects.

“A few days ago, we launched the UAE Strategy for the Future, and here we are today putting it into practice with an innovative system that connects our government departments with the world’s most innovative companies and turns government spending into an investment in the future. Our goal is to redefine the government’s role, whereby government entities are no longer mere operational units, but rather centers for planning the future and catalyzing global innovation,” said President and Prime Minister of the UAE and Ruler of Dubai Sheikh Mohammed bin Rashid Al Maktoum.

He said the initial programme had been launched by eight government entities but other government departments had also been instructed to join under the UAE Strategy for the Future launched last week.

There was also an update on projects from each government body:

Dubai Police: The future of safety and security
Dubai Police is working through its accelerator to lead the safety and security sector into the future by developing systems that rely on behavioural, genetic, and biological data to identify and track down outlaws with ten times the efficiency of the current systems. One project, in particular, uses artificial intelligence software to protect systems and databases against cyberattacks, as well as to track down cyber criminals.

Knowledge and Human Development Authority: The future of education
The authority is seeking to develop evaluation and self-education systems that rely on 21st-century skills, which can be applied to all curricula to make education more flexible, affordable, and efficient. Focus will be placed on Arabic, science and technology, engineering, mathematics, arts, programming, health, and happiness. One of the entries in the Authority’s accelerator is working on a project to use virtual reality to build virtual laboratories for students. The project not only revolutionises the education sector, but also saves governments millions of dollars by eliminating the need to invest in infrastructure and equipment for the laboratories.

Dubai Health Authority: The future of healthcare
DHA is working through its accelerator to capitalise on the immense social and genetic diversity in Dubai to improve precision in medical diagnostics, using genetics, analysis, and remote therapy. One particular entry is working on 3D-printed organs; the technology will lower the costs of training surgeons while simultaneously increasing their efficiency when performing intricate surgical procedures. Another company, meanwhile, is working on using genetics to improve diagnostics and preventative medicine.

Dubai Municipality: The future of sustainable infrastructure
The Municipality is experimenting through its accelerator with bio-construction and eco-friendly solutions, which seek to reduce energy consumption and CO2 emissions. One notable project is focusing on vertical urban farming, in an effort to supply the city of Dubai with food. The technology economises as much as 80 per cent of the water usually needed in agriculture, and transforms cities into self-sufficient ecosystems.

During his visit to the Municipality’s accelerator, H.H. Sheikh Mohammed bin Rashid launched the Dubai Lighting Project, a joint venture between the Dubai Municipality and Philips. The project developed the first light bulb to operate on one watt in the world; this will reduce energy consumption in the emirate by 30 per cent, and CO2 emissions by 16 per cent by 2021.

Dubai Holding: The future of technology
Dubai Holding’s accelerator is working to develop digital solutions using artificial intelligence to increase productivity and provide services within the sectors of hospitality, real estate, and communications. One of the notable entries in DH’s accelerators is a company specializing in “Deep Learning” and building interactive 3D models, while another notable entry works on developing an international market to trade loyalty points, turning them into a form of currency.

Roads and Transport Authority: The future of transportation
The authority is working on a number of initiatives to carry the transportation sector into the future. For one, RTA is working to develop an autonomous transportation and shipping system, which stands to increase efficiency and reduce CO2 emissions. One of the companies participating in RTA’s accelerator has devised a driverless transportation system, which echoes the directives of the Dubai Autonomous Transportation Strategy that seeks to turn 25 per cent of all vehicles in Dubai into autonomous mode by 2030. Another company, Hyperloop One, is looking to develop a high-speed transit system in the UAE that can transport people and merchandise at speeds exceeding 1,200 kmh.

Dubai Electricity and Water Authority: The future of energy and water
Seeking to reduce consumption and increase efficiency in production of renewable energy, DEWA’s accelerator includes a number of projects such as solar-powered cooling systems, which stand to cut energy consumption in the cooling sector by 30 per cent; and a project seeking to use artificial intelligence to analyse energy consumption levels of any household appliance and guides homeowners to reduce it.

Emirates NBD: The bank of the future
H.H. Sheikh Mohammed bin Rashid inaugurated Emirates NBD’s newest branch – a prototype for the bank of the future for its reliance on virtual reality and artificial intelligence. The branch is the first in the world to operate without employees, and will boast spaces to be used for workshops and hackathons pertaining to FinTech.