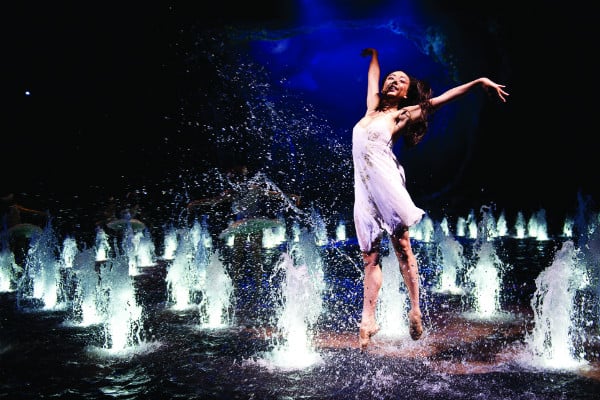 A new water show coming to Dubai in December – and costing at least $120m – is expected to pay for itself within five years, its world-renowned artistic director and creator has told Gulf Business.

Launching in December in Al Habtoor City, La Perle will focus on Dubai’s transformation and its status as a “crossroads of civilisation” in the Middle East – said Franco Dragone, one of the original masterminds behind Cirque du Soleil.

Including 65 daredevil artists carrying out breathtaking aerial and aqua feats before a specially tailored 1,300-seat auditorium, the show will also use a stage with a tank of 2.5 million litres of water.

Dragone is famous for a host of shows across the globe in locations such as Las Vegas, Orlando and Macau. His first show started in Vegas in 1993 and is still running today. He admitted his shows normally cost between $120-500m to create and the latest show was “in the same magnitude”, probably paying for itself “within five years” as is the norm with his productions.

Asked how long he expected the Dubai show to run for, Dragone – who was due to launch a show in the emirate previously before the 2008 economic crisis hit – said: “The plan is to stay forever, to create a theatrical tradition. It’s a new market so we need to learn about it and take some risks. It is the first time we will have this kind of show here. We will do everything possible to make it a success. We transformed Las Vegas into a destination where people go to see shows. Before, it was only for gambling.”

Revealing that he planned to eventually create academies in Dubai and Abu Dhabi as part of the project in order to train the stars of tomorrow, he added: “This is the dream, we are very keen to do that. We can find people and teach them. It’s something we want to do. The problem I faced when I came to do a short-run show before in Abu Dhabi, in 2013, was that I couldn’t find local talent. In Vegas, we created a community of artists. Maybe it will happen here too – especially with the opera house coming this year and Cirque du Soleil on its way here in a year or two.”

Explaining the choice of destination for his latest show, Dragone said: “Dubai for me is the laboratory of the future. A lot of things are happening here to make the UAE a hub, a crossroads for the world. The aim of my company is always to immerse into the culture of the country where we go and to be inspired by that country.

“This show will be specific to Dubai. To make a good meal, you need good ingredients. The theme of the show is Dubai as the crossroads of civilisation and the generation building the future. In 45 years here, they have changed their world.

“I am like a sponge, I observe the multicultural flavour of Dubai and that will be reflected in the show. The world will come here in four years with Expo 2020. It is now the case that things happen in Dubai before anywhere else. Before, we used to say ‘what happens in America comes to Europe 10 years after’. What is happening here now in the UAE is that they are more advanced than most of the world.”

Going further as to the contents of the show, Dragone said: “We have cast high-level performers from all over the world. The human performance will be the wow factor paired with new technology; each new show is almost like a prototype. It’s about the execution because the attention of a modern audience is very short so every 30 seconds you have to wake them up. The storyline is just a theme.”

Despite the scale of the project, it will launch during a time of deep unease across the global economy and when the low oil price is forcing people to restrict their spending habits. However, the show’s creator indicated he was unconcerned with the immediate financial problems and that the show was expected to get more than 500,000 customers in the first year alone.

“Does anyone remember a time when there was never an economic crisis?” said Dragone. “For us, it’s a long-term business. We cannot change our mind every time there is a problem. We expect to fill the house as soon as possible. This is our job, our business. We invest in places that we expect to grow. It’s a big investment and a big risk, of course.”

Ticket prices for the show will range from Dhs 400-700 and the main target audience will be “families” and “tourists” with a view to turning Dubai into a must-visit cultural hotspot. “When someone tells me I went to Orlando or Macau to see your show, it means the show has actually become a destination,” said Dragone.

“This is our ambition, to attract tourists. We will also have the local market because it’s an Arabian-themed show. Our audience will come from everywhere – Saudi Arabia, London, even America.

“The important thing is that it is our responsibility to create a universal language that everyone can understand, something that talks to the soul. You need to create a balance between art and business. The masses also deserve a high-quality product and that’s what we do. That aim has always guided me. The ticket price does not always decide what is good or not.”