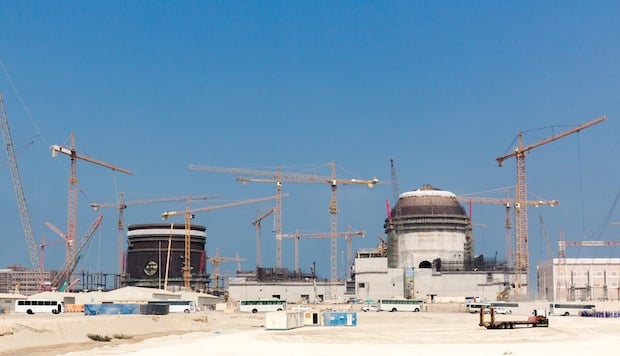 The construction of UAE’s nuclear power plant is progressing on schedule with work on the four units now 75 per cent complete.

The Emirates Nuclear Energy Corporation (ENEC) has announced that construction of units 3 and 4 at the Barakah Nuclear Energy plant is now more than 50 per cent complete.

Unit 3 is now more than 62 per cent complete and work to pour the concrete and complete the RCB is progressing. The RCB is expected to be completed in the first quarter of 2017, roughly a year after similar work was concluded on Unit 2, the statement said.

Meanwhile work on unit 4 is moving ahead of schedule.

“The completion of the turbine generator operating deck and the setting of the final reactor containment liner plate rings on unit 4 has allowed work to begin on erecting the turbine building and the interior and exterior concrete for the unit’s RCB is now being poured,” said Ahmed Al Rumaithi, ENEC’s deputy CEO.

“Once completed, we will be ready for the installation of unit 4’s Reactor Pressure Vessel in mid-2017. The construction of Unit 4 is now 35 per cent complete and is ahead of schedule, with the completion of the deck and rings having occurred roughly 10 months after similar work was concluded on Unit 3.”

The Barakah Nuclear Energy plant is scheduled for completion in 2020, with construction having started in 2012.

With four reactors online, the facility will deliver up to a quarter of the UAE’s electricity needs and save up to 12 million tonnes in carbon emissions every year.

All four units will deliver nuclear energy to the UAE grid, pending regulatory reviews and licensing.

“All construction milestones for the Barakah Nuclear Energy Plant project have been achieved in accordance with the highest standards of quality and safety,” said Mohamed Al Hammadi, ENEC CEO.

“Peaceful nuclear energy will bring many benefits, from the creation of high-value job opportunities to the emergence of a new sophisticated industrial sector to support operations in Barakah,” he added.