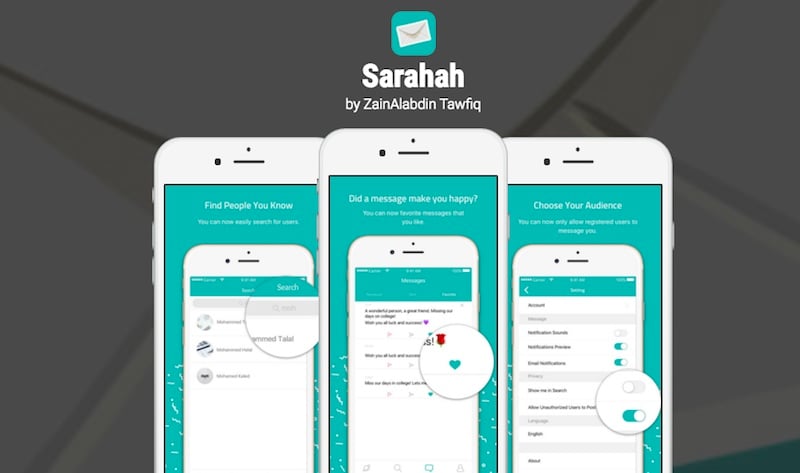 Sarahah, an app built by Saudi developer Zain Alabdin Tawfiq, has become the number one in app stores in 30 countries including the US, UK and France in the last month, it revealed on Twitter.

Sarahah has had more than one billion page views during the last month, it added.

An anonymous messaging service, Sarahah only requires users to register on the app, after which they can request for feedback about themselves. Meanwhile other users can post comments without revealing their identity.

It was started as a website to solicit workplace feedback, allowing employees to share their opinion without disclosing their identity to avoid any discrimination.

However, the applications were soon transferred to a personal domain, and the app for Sarahah – which means honesty in Arabic – was created.

The app on both iOS and Android was released internationally on June 13, and with its integration with Snapchat, it soon became extremely popular.

Speaking to Gulf Business, Tawfiq said his preliminary goal was to achieve 1,000 messages.

“We currently have over 300 million messages, so it definitely exceeded all of my expectations,” he said.

According to him, the app also performed really well regionally before going to the West.

“Actually at some point we received five million unique users in a day from within this region – it was very famous, especially in Egypt,” he said.

While the app is still growing in popularity, one concern that has grabbed international headlines is the issue of cyber-bullying.

The app has attracted severe criticism, with many youngsters claiming they receive hateful messages.

“I feel harassed on this app,” wrote one reviewer, while another called it the “absolute worst idea” and urged for it to be shut down.

Tawfiq provided a company statement regarding the issue.

“Sarahah aims to create a platform where constructive feedback is enabled in an environment of candor and frankness to all our valued users,” it said.

“Unfortunately, the possibility of misuse of digital platforms is a challenge facing all these platforms including the major ones. Sarahah takes this issue very seriously and We have taken several measures to address this challenge and we will continue to enhance these measures,” it added.

“While the concept of Sarahah is interesting, whether it will last or not remains to be seen,” said Mike Priest, the editor of tech magazine Stuff Middle East.

“We’ve seen similar anonymous apps spring up on the App Store over the years (Whisper, Yik Yak etc), and while they’ve been the ‘flavour of the month’ for a while, they are eventually forgotten about or replaced.

“That the app has come out of the Middle East is encouraging, showing that there are developers in this region that can create software with global appeal,” he added.

It is indeed not common to see an app developed in this region top global charts, but Tawfiq asserts that opportunities are growing, thanks to a growing start-up ecosystem.

“We received support from Badir – a Saudi incubator – that offered us free support – so they do not own anything in Sarahah in terms of shares. We did not have to pay Badir anything yet they provide with us with legal support, support with media and offer free consultation from top notch personnel,” he explained.

“We also had support from Microsoft Saudi – they gave us credit in their cloud, and a lot of venture capitalists in Saudi Arabia and in the region offered to help us. So the support is there.

“I believe the doors are open. If someone has a strong idea and he places great effort, he can reach to the top of the charts,” he added.

So far, the company has not been required to raise any funding, and has not “spent a single dollar on advertising”, according to Tawfiq.

“We are being contacted by a lot of investment firms and we are open to a lot of options,” he said.

Looking ahead, he confirms that Sarahah may enter new markets soon, but refuses to reveal what else has been lined up, stating “I hope users will like the surprises that we have in store”.