At the drone show that lit the Dubai Frame, Xiaomi announced three new smartphones to the Xiaomi 11 family of devices. These include Xiaomi 11T, Xiaomi 11T Pro and Xiaomi 11 Lite 5G NE.

The Xiaomi 11T Pro is its first smartphone to be released internationally with its patented 120W hypercharge technology. This allows for a full charge in just 17 minutes. The Qualcomm Snapdragon 888 CPU within the smartphone aids in the delivery of a slew of AI functions. With the smartphone having a triple-camera system, it also includes a 108MP wide lens, a 2x telemacro lens, and a 120-degree ultra-wide-angle lens. The computational filmography capabilities with one-click AI Cinema modes, 8K recording and HDR10+, allows users to capture footage with the same smart ISO technology found in digital cameras. The Xiaomi 11T Pro also features several eye care functions to protect users from eye strain, such as true display, which automatically adjusts the colour temperature according to the surrounding conditions and reading mode 3.0; and dual speakers with sound by Harman Kardon. 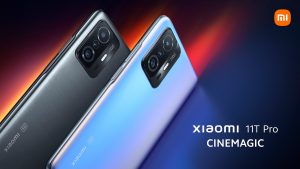 Xiaomi 11T
The Xiaomi 11T also has a triple-camera system with a 108MP wide, 2x telemacro, and a 120-degree ultra-wide-angle lens. Users can take advantage of AI cinema techniques like time freeze, night time-lapse, magic zoom, and other complex shots with a single click. The smartphone has a 6.67-inch 120Hz flat AMOLED display with HDR10+, over 1 billion colours, and an array of eye-care functions. Furthermore, the gadget is powered by a 5,000mAh battery and the MediaTek Dimensity 1200-Ultra processor. This can be recharged using 67W wired turbocharging, which gets it to 100 per cent in just 36 minutes.

The significant upgrade under the hood is the Apple A15 chipset, which provides a substantial performance boost. The new processor in the iPhone 13 Pro and Pro Max offers 50 per cent better graphics performance, which Apple claims is higher than any other smartphone currently in the market. Apple has also released a 1TB version for both smartphones with this generation.