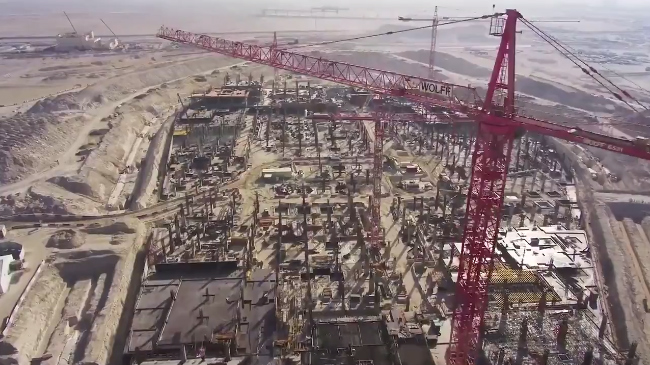 Footage that appears to be shot from Google Earth and a helicopter shows buildings rising out of the sand across the 4.38-square-kilometre site and drilling work underway for the Route 2020 Dubai Metro expansion.

Text accompanying the video states that more than 6,000 cubic metres of concrete are being laid at the site every week.

Authorities have until the expo opening on October 20, 2020 to finish their preparations. The event will then run until April 10 the next year.

In 2017, a number of major contracts were awarded including for the UAE pavilion and the central Al Wasl Plaza

A section of the Dubai Metro was also recently closed to allow work on the metro extension to take place.

Replacement buses are operating between Jumeirah Lake Towers (JLT) station and Ibn Battuta station as the 15km expansion from Nakheel Harbour and Tower station to the site of Expo 2020 is finished.

On the way it will pass through areas including Discovery Gardens, Furjan, Jumeirah Golf Estates and Dubai Investment Park.