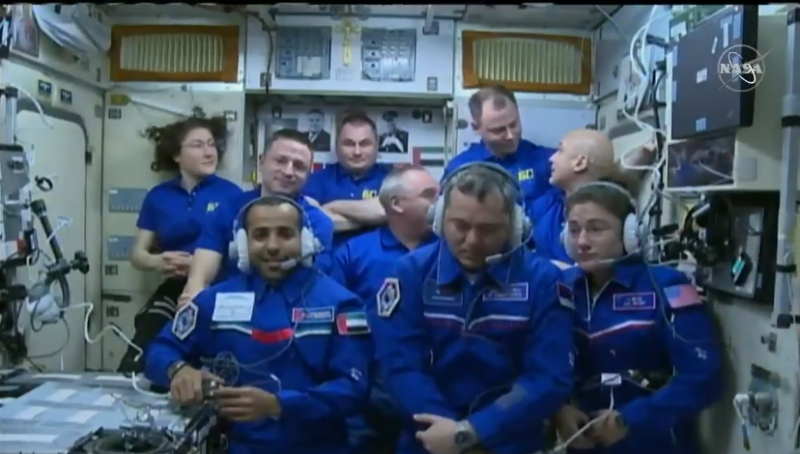 The UAE’s first astronaut Hazza Al Mansoori successfully took off to space from Baikonur Cosmodrome in Kazakhstan aboard a Soyuz MS-15 spacecraft on Wednesday evening.

Al Mansoori is part of a three-person mission including Russian commander Oleg Skripochka and Nasa astronaut Jessica Meir. He is serving as a second flight engineer on the mission.

WATCH: Historic moment the Soyuz MS-15 launched with #FirstEmiratiAstronaut @Astro_Hazzaa on board, heading to the International @Space_Station. #UAE pic.twitter.com/Zcm8PY0M3Y

The expedition later arrived at the International Space Station (ISS), where they were welcomed by the six astronauts currently at the station.

After a four-orbit, six-hour journey to the @Space_Station, three Earthlings opened the hatch to their new home at 6:12pm ET. Watch the crew being welcomed aboard our orbiting laboratory and ask questions using #AskNASA: https://t.co/YqjHuhFtPX pic.twitter.com/VBm3g8LRlL

Al Mansoori will stay for eight days at the ISS and is set to return to earth on October 3.

“Hazza Al Mansouri’s arrival in space is a message for all Arab youths that we can move forward and advance and catch up with others.”

In going to the ISS, Al Mansoori, 36, is set to become the first Emirati in space. During the mission, Al Mansoori, who was born in Abu Dhabi and is also a military pilot, will conduct experiments related to the effects of microgravity on the human body and carry out maintenance on the space station.

He will also conduct experiments provided by 16 different schools across the UAE. The Mohammed Bin Rashid Space Centre, in cooperation with the Emirates Amateur Radio Society, will also coordinate live sessions with Al Mansoori while he is aboard the ISS.

Hours before the launch, Al Mansoori took to Twitter to say “I carry the dreams and ambition of my country to a whole new dimension”.

A few hours before launch and I’m filled with this indescribable feeling of glory and awe. Today I carry the dreams and ambition of my country to a whole new dimension. May Allah grant me success in this mission. Your brother, Hazzaa AlMansoori.

In preparing for the mission, Al Mansoori underwent more than 1,400 training hours and has taken more than 90 courses, run by the likes of NASA, the Russian space agency Roscosmos, the European Space Agency, and more.

As part of his personal items luggage allowance, Al Mansoori has taken with him a copy of the Holy Quran, the book “My Story” (“Qissati” in Arabic) by Sheikh Mohammed bin Rashid Al Maktoum, Vice-President and Prime Minister of the UAE and Ruler of Dubai, a photograph of UAE founder Sheikh Zayed bin Sultan Al Nahyan meeting three American astronauts in 1976, a silk UAE flag, 30 ghaf tree seeds, Emirati food, inflatable balls which represent Mars and Earth, and family photos.