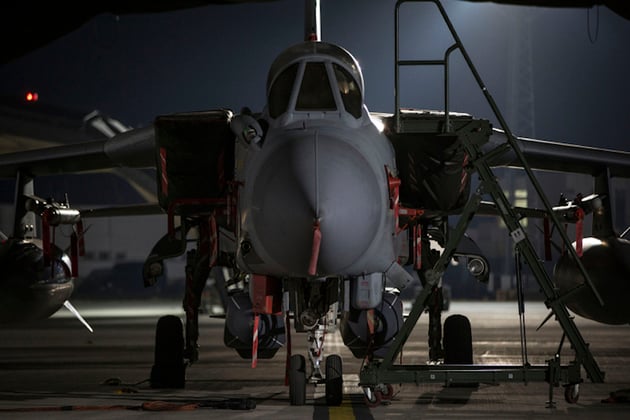 US, British and French forces pounded Syria with air strikes early on Saturday in response to a poison gas attack that killed dozens of people last week, in the biggest intervention by Western powers against Syrian President Bashar al-Assad.

US President Donald Trump announced the military action from the White House. As he spoke, explosions rocked Damascus.

British Prime Minister Theresa May and French President Emmanuel Macron said their forces had joined in the attack.

Mattis called the strikes a “one time shot,” but Trump raised the prospect of further strikes if Assad’s government again uses chemical weapons.

“We are prepared to sustain this response until the Syrian regime stops its use of prohibited chemical agents,” the US president said in a televised address.

The Syrian conflict pits a complex myriad of parties against each other with Russia and Iran giving Assad military and political help while fractured opposition forces have had varying levels of support at different times from the West, Arab states and Turkey.

The strikes risked raising tension in an already combustible region but appeared designed not to trigger a military response from Russia and Iran.

“Again, we are being threatened. We warned that such actions will not be left without consequences,” Anatoly Antonov, Russia’s ambassador to the United States, said on Twitter.

Syrian state media said the attack would fail and called it a “flagrant violation of international law.”

It was unclear if the strikes will deter Assad from again using chemical weapons.

They seemed unlikely to have much impact on the balance of power in Syria’s seven-year-old civil war, in which Assad’s government has steadily gained the upper hand against armed opponents since Russia intervened in 2015.

Trump had tough words for Assad and his suspected role in last week’s chemical weapons attack. “These are not the actions of a man. They are crimes of a monster,” he said.

At least six loud explosions were heard in Damascus and smoke was seen rising over the city, a Reuters witness said. A second witness said the Barzah district of Damascus had been hit in the strikes. Barzah is the location of a major Syrian scientific research center.

A senior official in a regional alliance that backs Damascus told Reuters that said the Syrian government and its allies had “absorbed” the attack, and that targeted sites were evacuated days ago thanks to a warning from Russia.

State-controlled Syrian TV said Syrian air defences shot down 13 missiles fired in the US-led attack. The Russian defence ministry said none of the rockets launched had entered zones where Russian air defence systems are protecting facilities in Tartus and Hmeimim.

The combined US, British and French assault appeared to be more intense than a similar strike Trump ordered almost exactly a year ago against a Syrian air base in retaliation for an earlier chemical weapons attack that Washington attributed to Assad.

At a Pentagon briefing, Dunford said the air strikes on Saturday were planned to minimize the risk of casualties among Russia’s forces in Syria.

Mattis acknowledged that the United States conducted the air strikes only with conclusive evidence that chlorine gas was used in the April 7 attack in Syria. Evidence that the nerve agent sarin also was used is inconclusive, he said.

Allegations of Assad’s chlorine use are frequent in Syria’s conflict, raising questions about whether Washington had lowered the threshold for military action in Syria by now deciding to strike after a chlorine gas attack.

Mattis, who US officials said had earlier warned in internal debates that too large an attack would risk confrontation with Russia, described the strikes as a one-off to dissuade Assad from “doing this again.”

But a US official familiar with the military planning said there could be more air strikes if the intelligence indicates that Assad has not stopped manufacturing, importing, storing or using chemical weapons, including weaponised chlorine.

The official acknowledged that could require a more sustained US air and naval presence in the region, as well as intensified satellite and other surveillance of Syria.

Trump, however, has been leery of US military involvement in the Middle East, and is eager to withdraw roughly 2,000 troops who are in Syria as part of the battle against Islamic State militants.

The air strikes, however, risk dragging the United States further into Syria’s civil war, particularly if Russia, Iran and Assad opt to retaliate.

“America does not seek an indefinite presence in Syria, under no circumstances,” Trump said in his eight-minute address.

“The purpose of our actions tonight is to establish a strong deterrent against the production, spread and use of chemical weapons,” he said.

The US president, who has tried to build good relations with Russian President Vladimir Putin, had sharply critical words for Russia and Iran over their support of Assad.

“To Iran and to Russia, I ask, what kind of a nation wants to be associated with the mass murder of innocent men, women and children?” Trump said.

Macron said: “We cannot tolerate the employment of chemical weapons.”

Last year, the United States fired 59 Tomahawk cruise missiles from the guided missile destroyers USS Porter and the USS Ross that struck the Shayrat air base.

The targets of that strike included Syrian aircraft, aircraft shelters, petroleum and logistical storage facilities, ammunition supply bunkers, air defense systems and radar. At the time, the Pentagon said that a fifth of Syria’s operational aircraft were either damaged or destroyed.

The US-led attack on Syria will be seen as limited if it is now over and there is no second round of strikes, said a senior official in the regional alliance that has supported President Bashar al-Assad in the Syrian war.

“If it is finished, and there is no second round, it will be considered limited,” the official told Reuters.