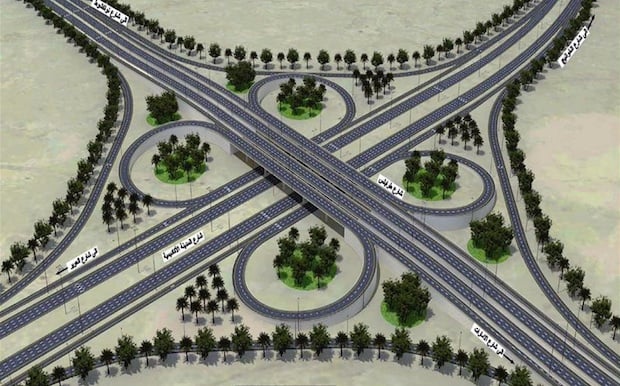 A new roads improvement project that aims to ease traffic congestion between Dubai and Sharjah has been approved by UAE Vice-President and Prime Minister and Dubai’s ruler Sheikh Mohammed bin Rashid Al Maktoum.

Sheikh Mohammed approved the award of a Dhs500m contract for the improvement of Tripoli Road in a 12km stretch to provide a link between Sheikh Mohammed bin Zayed Road and Emirates Road.

The new project includes the widening of Tripoli Road over a 6.5km stretch from the intersection with the Sheikh Mohammed bin Zayed Road (nearby Mirdif City Centre) up to the Academic City Road. It also includes the construction of a new 5.3km road of three lanes in each direction from the intersection of the Academic City up to the Emirates Road.

RTA director general and chairman Mattar Al Tayer said: “The project aims to enhance the link between Dubai and Sharjah besides easing traffic congestions, streamlining traffic movement and stepping up safety along this corridor. Upon completion, the project will act as a parallel to Al Amardi–Al Khawaneej as well as Al Awir-Ras Al Khor corridors.”

The project also covers the development of interchanges across the corridor starting with the upgrading of Tripoli-Algiers Roads junction to a tunnel of three lanes in each direction.

Works also include upgrading the current at-grade signalised intersection. Once complete, the waiting time at the existing intersection is expected to drop from three minutes to less than one minute, a statement said.

The project also includes upgrading Tripoli- Nouakchott junction to a bridge of three lanes in each direction, improving the existing at-grade signalised junction, and changing the intersection of Tripoli-Academic City Roads into a flyover.

It also includes changing the Tripoli-Emirates Roads junction into a bridge to serve the traffic inbound from Tripoli Road heading to Emirates Road in the direction of Sharjah.

“The project will contribute to the improvement of the entry points of Al Warqaa and Mirdif along Tripoli Road, besides enhancing the traffic safety level at the junction of Rabat-Nad Al Hamar Roads near Bel Remaitha Club,” said Al Tayer.

The new project also provides a parallel and supporting corridor to the Airport Road Improvement project, which the Roads and Transport Authority (RTA) is currently implementing at a cost of Dhs490m.

The construction of the Airport Road is currently 30 per cent complete, said Al Tayer.

“The project is part of a plan set by RTA for accommodating the projected growth in the number of passengers using the Dubai International Airport, which is expected to shoot to 92 million passengers by 2020. Thus the traffic study showed the importance of finalising the improvement of the Airport Road by 2017,” he said.

It also includes improving at-grade intersections and is expected to increase the capacity of the Airport Road by an additional 5,000 vehicles per hour.

“It would also enhance the traffic safety level and reduce the journey time on the Airport Road from Sheikh Mohammed bin Zayed Road to Casablanca Road from 30 minutes to five minutes. The improvement of Rashidiya Intersection comprises the construction of a bridge on the Airport Road of three lanes in each direction, which is expected to slash the waiting time at the interchange from 13 minutes to less than one minute,” said Al Tayer.

The improvement of the Marrakech-Airport Roads junction also includes the construction of a flyover of three lanes in each direction on the Airport Road along with a ramp stretching from the bridge directly to Terminal three of Dubai International Airport.

A tunnel of two lanes in each direction is under construction to serve the leftward-bound traffic movement from the Airport Road to the direction of Marrakech Road, which reduces the waiting time at the junction from seven minutes to less than one minute.

“The upgrading of the Airport–Casablanca Roads Junction Intersection includes the construction of an alternative road for traffic coming from Al Garhoud enabling vehicles direct access to Terminal 1 and 3 of the Dubai International Airport,” said Al Tayer.

“Such projects are essential to keep pace with the ongoing upswing witnessed by Dubai, meet the requisites of growth and demographic expansion, and bring happiness to people,” he added.