Saudi Arabia’s Ministry of Media has suspended a Twitter account after receiving complaints that it shared an infographic that was perceived to be offensive to Canada.

The move comes even as Saudi Arabia remains embroiled in a diplomatic row with Canada, after Ottawa urged Riyadh to free arrested rights activists. On Sunday, the kingdom froze new trade and investment with Canada, recalled its ambassador and gave the Canadian ambassador 24 hours to leave the country.

A day later, the twitter handle @Infographic_KSA shared – and soon deleted – an image that appeared to show a plane flying towards the skyline of Toronto with the CN Tower clearly visible.

The image also had the text “As the Arabic saying goes: ‘He who interferes with what doesn’t concern him finds what doesn’t please him’.”

Screenshots of the image are still circulating on social media.

Now deleted, here a screenshot of the threatening Saudi "infographic" featuring an airliner headed for the Toronto skyline. pic.twitter.com/LrkCLxxjFk

The image caused an uproar as several social media users claimed it reminded them about the September 11, 2001 attacks on the World Trade Centre in New York.

The @infographic_ksa account later clarified that the image did not refer to the 9/11 attacks, but instead showed a plane carrying the Canadian ambassador home.

Based on a complaint filed to the ministery of Media about a post by @Infographic_ksa, the ministry has ordered the owner of the account to shut it down until investigations are completed, according to electronic broadcasting laws in KSA. pic.twitter.com/jD2maoOyEV

A modified version of the original image, without the plane, continued to feature on Instagram account of @infographic_ksa, which has over 88,000 followers. 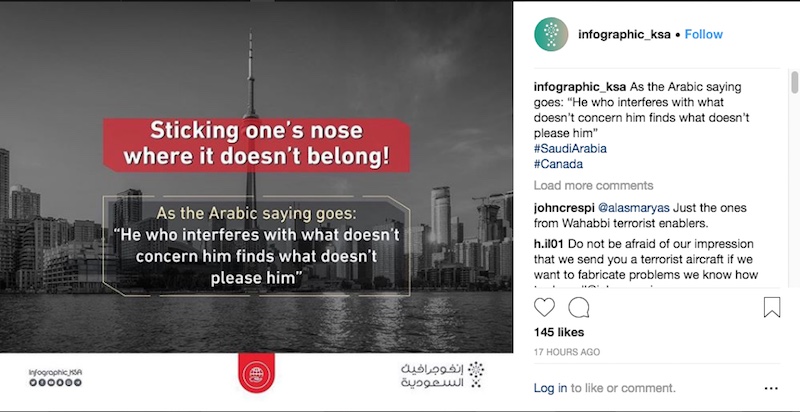 The spat between Saudi Arabia and Canada has shown no signs of abating, with the Saudi national airline also suspending all flights to Canada.

The kingdom has said Canada’s actions amounted to “a blatant interference in the Kingdom’s domestic affairs, against basic international norms and all international protocols.”