Photo used for illustrative purposes only

Saudi Arabia’s air defence forces intercepted a missile fired by Yemen’s Houthis towards the southern city of Najran on Sunday, resulting in a fire on the ground below, according to state-run Saudi Press agency

A Saudi coalition spokesperson said the missile was fired towards Najran from Sa’dah governorate in Yemen on Sunday afternoon.

The projectile was intercepted and shrapnel fell over residential areas, starting a fire in a farm owned by a Saudi national, colonel Turki Al-Malki said.

“No casualties were recorded up to the time of this release,” he said.

A second missile detected earlier on Sunday at 2:48pm fell on empty ground, the coalition announced.

He said the missiles were fired deliberately at civilian areas in breach of international law.

Najran has been repeatedly targeted by Houthi missile attacks across the border, with the most recent incident occurring less than a week ago on Monday, April 17.

The Houthis have stepped up attacks in recent weeks at times launching multiple projectiles at once.

The kingdom suffered its first casualty from a missile attack last month when an Egyptian resident of Riyadh was hit by debris from three missiles targeting the capital as part of a wider attack also aimed at Najran, Jizan and Khamis Mushait.

The Saudi coalition said last week that 119 rockets and 6,6259 projectiles had been fired across the border into the kingdom as of April 16. 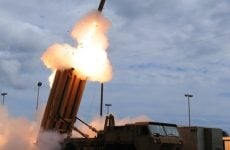 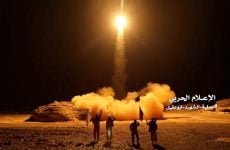