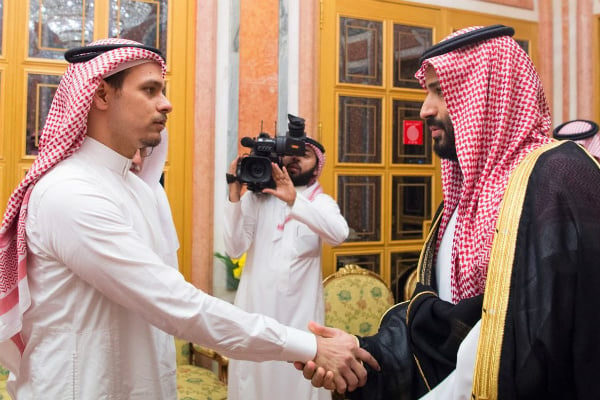 Saudi Arabia’s king and crown prince on Tuesday received family members of journalist Jamal Khashoggi after he was killed at the Saudi consulate in Istanbul earlier this month.

After weeks of silence, the kingdom said on Saturday the Washington Post columnist died in a fist fight at the consulate during an operation carried out by a rogue Saudi security team.

State media reported that 18 nationals were arrested and five senior officials were dismissed in response to the incident.

Western government officials have expressed scepticism at the account, with some senators in US President Donald Trump’s Republican party suggesting Crown Prince Mohammed bin Salman may have been involved.

The two were seen shaking hands with both royals.

“The Custodian of the Two Holy Mosques and His Highness the Crown Prince expressed their deepest condolences and condolences to the family and relatives of the late Jamal Khashoggi,” the news agency said.

“Salah and Sahl Khashoggi expressed their great thanks to the Custodian of the Two Holy Mosques and His Highness the Crown Prince for their condolences to them on the death of the deceased.”

Controversy surrounding Khashoggi’s death showed little sign of going away on Tuesday as the kingdom opened an investment conference.

In the build-up, many Western executives and officials pulled out of the Future Investment Initiative due to concerns regarding Khashoggi’s status.