Revealed: Where Abu Dhabi property rents, prices fell the most in 2017 - Gulf Business

The Abu Dhabi property market has seen substantial declines in property rents and sales prices over the last year.

In an end of year report, property site Bayut.com compiled a list of popular areas that had seen the most substantial decreases year-on-year from November 2016 to December 2017.

This revealed falling rents in even the most popular and affordable areas.

Apartments in Al Reem Island, described as the most in-demand area among Abu Dhabi tenants, were found to be 14 per cent lower than the previous year with studios commanding Dhs60,000, one-beds Dhs82,000 and two-beds Dhs120,000.

While the same percentage decrease was also seen in the most expensive area, the Corniche, where studio rents declined to Dhs80,000, one-bed rents to Dhs99,000 and two-bed rents to Dhs135,000.

Far and away in the leader in terms of price declines though was two-bed apartments on Airport Street, which now averaging Dhs85,000 a year were 29 per cent lower than 2016. In contrast, studios in Khalifa City A remained at a stable Dhs36,000. 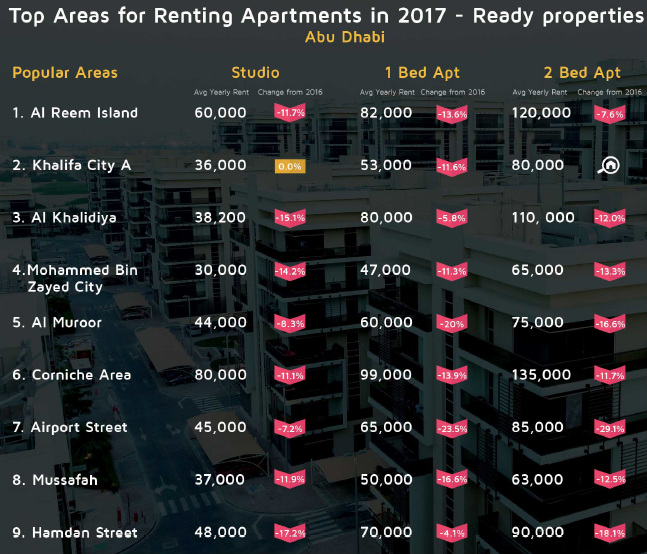 Bayut said the most popular area for villa rentals on its site was Mohammed Bin Zayed City where the average yearly lease was down 5-14 per cent with three-beds costing Dhs120,000, four-beds Dhs150,000 and five-beds Dhs165,000.

But there was a less sizeable decrease in average rates in the most expensive area among the popular choices, Bain Al Jessrain, where a 3-4 per cent meant villa rents still ranged from Dhs200,000-250,000. 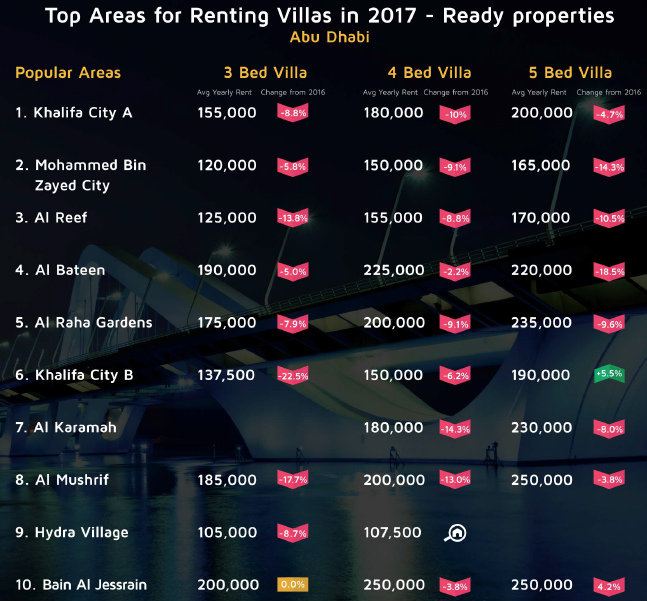 In the sales market, property prices were down 6-8 per cent in the capital’s most popular apartment area Al Reem Island where studios now fetch around Dhs680,000, one-beds Dhs1.1m and two-beds Dhs1.7m.

Al Raha Beach, another popular area, offered the highest priced studios on the market at Dhs1.2m despite prices falling 8 per cent year-on-year and Saadiyat Island offered the most expensive two-beds, with an average price of Dhs2.6m, despite a 11.7 per cent decline.

Among the affordable areas, Al Ghadeer was the most popular and saw a less substantial decrease of 5.6 per cent as a result. Studios in the area are now priced at Dhs500,000, just above the Dhs540,000 in Masdar City where a relatively minor decline of 1.8 per cent was observed. 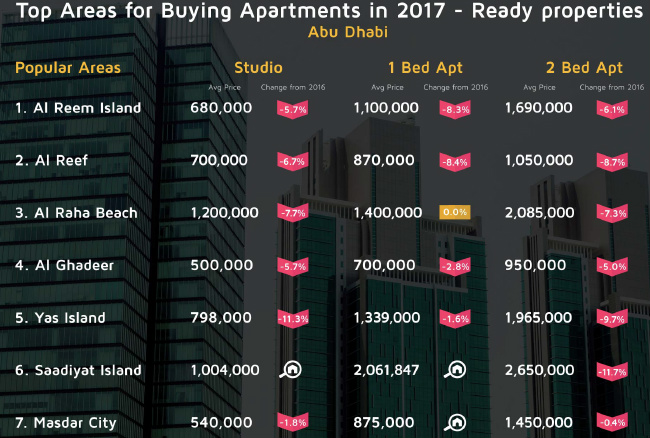 Saadiyat was the most expensive area for buyers despite a 5.7 per cent decline in average prices on the previous year. These ranged from Dhs6.6m to Dhs10m and remained unchanged in the five-bed category. 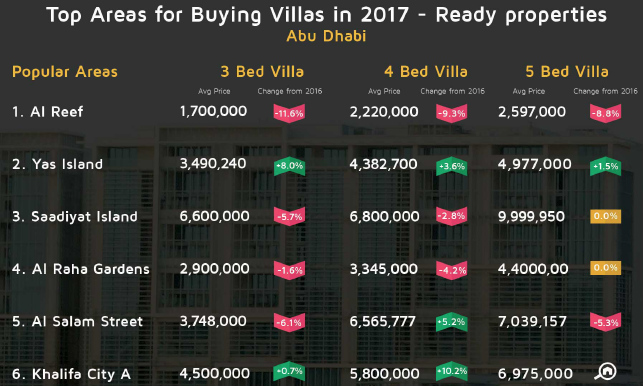 Saadiyat Island saw less of an impact due a smaller inventory of apartments in 2017 but in the villa market Yas Island saw prices fall from Dhs3.8m to Dhs3.6m and Khalifa City saw similar decreases for five-bed properties due to new listings and completions.

The Saraya project in the Corniche was the most visited on Bayut.com followed by Saadiyat Island’s Soho Square Residences, and Park View.

Water’s Edge was the most searched off-plan community on Yas Island closely followed by Ansam, thanks in part due to strong media support.