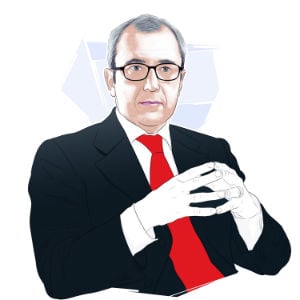 The past twelve months have seen positive business in the GCC for Geneva-based Lombard Odier, after poaching a number of big-name relationship managers from institutions such as Credit Suisse and Emirates NBD in 2011 and 2012.

“This year has been good so far,” says Arnaud Leclercq, Lombard Odier’s head of new markets. “The first quarter was quite difficult but it’s picked up quite a bit since.” The bank has seen a 16 per cent increase in Middle Eastern revenues during the past twelve months. Assets under management are also growing, albeit not quite as quickly.

Although the Middle East still accounts for less than 10 per cent of Lombard Odier’s global assets under management, the figure is growing steadily.

Leclercq plans to increase this figure to 20 per cent by the end of 2017.

The bank has achieved some success with helping Gulf-based high net worth individuals and wealth families to broaden their existing portfolios, consisting largely of fixed income and real estate. Clients have responded especially positively to the bank’s emerging market consumer goods fund, which have appealed to investors already active in such markets, says Leclercq.

“You have a new growing consumer class across regions such as the Middle East, Africa and Latin America, which has much more purchasing power than they used to in previous years, leading to some interesting growth in consumer goods companies. Our clients will frequently already be investing and operating in such markets and they know that the growth is there, so this product is particularly interesting for them.”

The bank is continuing to slowly but surely expand its team in the UAE, and is increasingly discerning about the relationship managers it takes on, says Leclercq.

“We’re not just looking to take anyone on. We look for candidates who have a proven track record, who are reliable, and who’ve spent five to ten years in the same bank and haven’t jumped around too much. It’s not rocket science,” says Leclercq.

While the bank’s physical presence in the region is limited to its Dubai, the office has made serious in-roads into markets across the region.

“We have more of a presence now with clients in Abu Dhabi. Oman in particular is a market where we didn’t see much activity in the past, but we have a serious business growing there now. Saudi is a place where we’ve continuously aggressively expanded, with more and more large families dealing with us now than in the past.”

In the wake of the Arab Spring, Switzerland’s reputation as a safe-haven has led to an increase in assets booked by regional clients with Lombard Odier, says Leclercq. “Some clients with money booked in more stable jurisdictions and the region are asking how long it will be before they in turn are affected, and so they may well be allocating more assets with us than they used to. That’s the main impact of the Arab Spring we’ve seen.

“This has not equated to the booking of assets from specific troubled markets such as Bahrain and Egypt,” he said.

Lombard Odier in February announced plans to change its legal structure in Switzerland from an unlimited partnership to a limited company, the same structure used by all of its operational subsidiaries.

The change will have little impact on the bank’s Middle Eastern operations, says Leclercq.

“It’s just a different legal structure will facilitate our international expansion, as some clients were requiring more information and transparency the old structure didn’t provide for. By 2014 it’ll be a more classic holding company. But clients will see that the ownership of the bank remains unchanged, so it shouldn’t have an impact.”