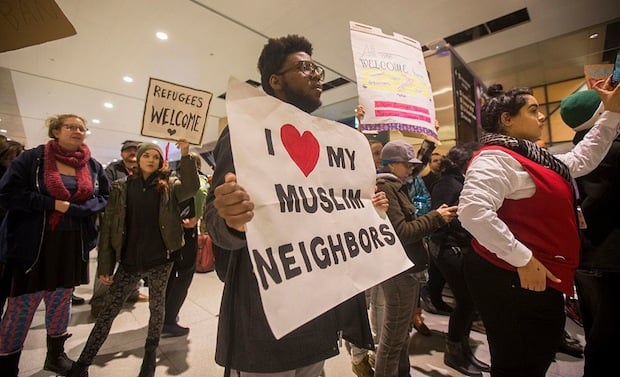 The Organisation of Islamic Cooperation (OIC) has expressed “grave concern” over the executive order passed by US President Donald Trump banning seven of its member states from entering the United States.

In a brief statement, the OIC General Secretariat said that the decision would “further complicate already grave challenges facing refugees” indicating many of those “fleeing war and persecution” had already been “adversely and unjustly affect”.

“Such selective and discriminatory acts will only serve to embolden the radical narratives of extremists and will provide further fuel to the advocates of violence and terrorism at a critical time when the OIC has been engaged with all partners, including the US, to combat extremism and terrorism in all their forms and manifestations,” the organisation said.

It went on to call for the US to reconsider the decision and maintain its “moral obligation” to provide leadership at a time of great uncertainty and unrest in the world.

The new US travel restrictions, which were enacted through an executive order by Trump on Friday, ban the entry of travellers from Iran, Iraq, Libya, Somalia, Sudan, Syria and Yemen for at least 90 days.

The order also put a four-month hold on refugee arrivals to the country.

The restrictions have been criticised across the world, particularly in the Middle East, which is home to many of the affected countries.

Read: US travel curbs decried as ‘unjust, insulting’ in the Middle East

Yesterday, Iraq called for the US to reconsider the travel ban on its citizens after the country’s parliament demanded the government introduce a retaliatory ban on US citizens.

Neighbouring Iran has banned US citizens who have not already obtained a visa to enter the country.