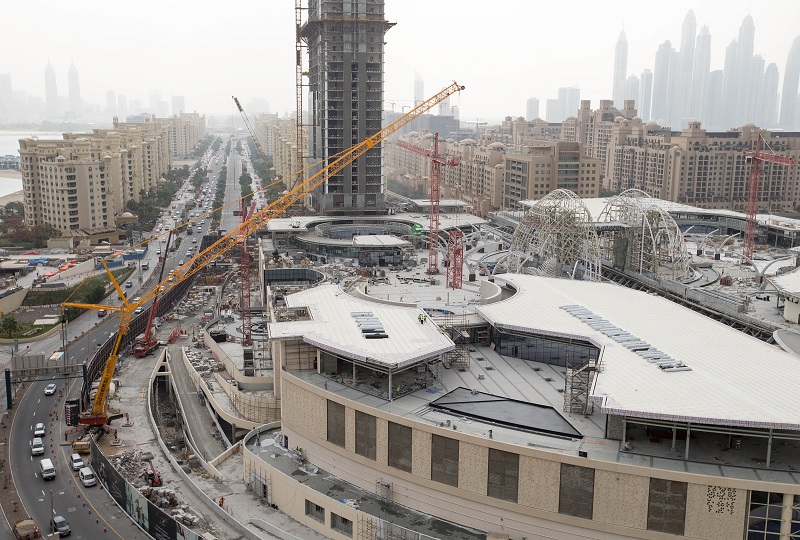 All under and above ground floor and ceiling work has been completed, with interior works, such as granite and glass fixing also “on track”, a statement said.

The centre piece of the complex – a 25 metre high crystal dome that will feature the mall’s Monorail station – is also taking shape, Nakheel said.

Inside the mall, fit out of the 60,000 sq ft, 15-theatre Vox Cinemas complex has begun, with more retailers due to start fitting out. Some of the confirmed retailers include Waitrose, Adidas, Breitling, French Connection and Montblanc.

The mall will also be the access point for the 240 metre ascent to the public viewing deck at The Palm Tower, Nakheel’s 52-storey hotel and residential building – currently under construction. The Palm Tower comprises a 289-room St Regis hotel and 432 luxury apartments, with an infinity pool on the 50th floor. Above that is a 51st storey restaurant complex, with the rooftop viewing deck on the 52nd level.

Nakheel did not confirm when the mall will be open to the public – it was initially slated for completion in 2017.

The developer is currently carrying out an Dhs16bn ($4.35bn) expansion programme that will take its total retail space to over 17 million sq ft.

The developer is also continuing to develop its offerings on Palm Jumeirah. Along with Nakheel Mall, other projects in the pipeline include the Palm 360 two-tower hotel and residential complex featuring a Raffles hotel, Raffles-branded residences including 12,000 sq ft penthouses, and the world’s largest sky pool; The Pointe mall; The Palm Promenade; Palm West Beach; The St Regis Beach Club; and Palm Beach Residences.