Most likely cause of Sharjah fire revealed, cladding for up to 150 buildings to be changed - Gulf Business 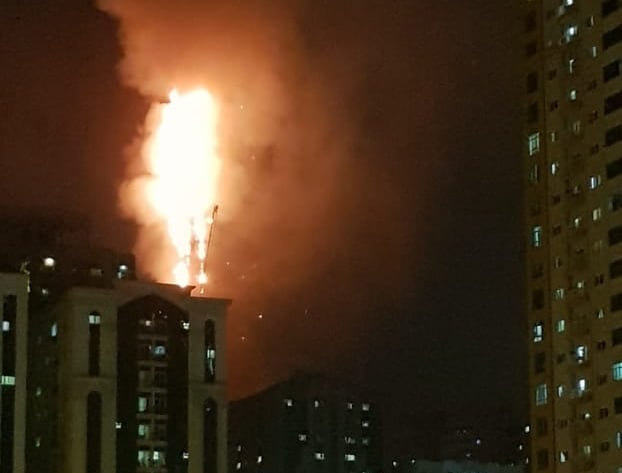 The massive blaze that ripped through the Abbco Tower in Sharjah last week was most probably caused by a discarded cigarette butt or shisha coals, the Sharjah Police have confirmed.

Flammable cladding on the building was found to be one of the main reasons for the fire to spread.

The blaze in Al Nahda left 12 people with minor injuries, and forced over 250 families to find alternative accommodation until the tower can be renovated.

In a virtual press conference, brigadier general Ahmed Haji Al-Serkal, acting director general of Police Operations, said they were “90 per cent” sure the incident was caused by a “burning object”, such as a cigarette butt or a glowing coal (from a shisha), which was discarded from the upper floor.

The ‘burning object’ landed on the 10th floor (the first residential floor after parking), where preliminary investigations indicated that the fire began in a service corridor, igniting highly flammable aluminum sheets that were used for cladding.

He stressed that procedures were still underway by the field teams to confirm the actual cause of the fire.

Although Sharjah stopped issuing permits to install flammable materials on the facades of buildings since 2016, officials said about 150 buildings in the emirate still had aluminum cladding.

The owners of the buildings are being contacted by the municipality department to have it replaced.

Major general Saif Al-Zari Al-Shamsi, commander-in-chief of Sharjah Police also confirmed that all those affected have been provided housing until the building is restored.

“We have instructed the concerned authorities of Sharjah Police to extract the documents and official documents of the residents of the tower which were damaged by the fire, from their residence inside the hotels designated for them, without the need to visit the police stations to complete these transactions.”

Officials also urged members of the public who live in residential towers to avoid throwing cigarette butts or any burning materials from the balconies of the upper floors, which may lead directly to the outbreak of major fires.

Interview: Carlos A. Rosillo, CEO and co-founder of Bell & Ross