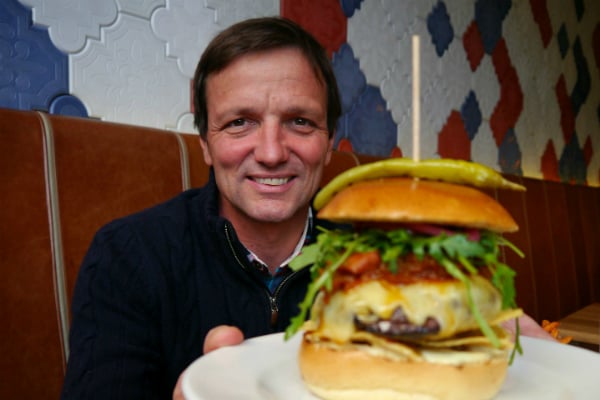 The chief executive officer of UK restaurant chain Gourmet Burger Kitchen Alasdair Murdoch, tells Robert Anderson about how he turned the brand around, its global and regional expansion plans and whether there is any truth to the rumours it is about to be sold

When Alasdair Murdoch took over New Zealand-inspired United Kingdom restaurant chain Gourmet Burger Kitchen he had a substantial task ahead of him.

Prior to the £30.4m ($47.5m) acquisition of GBK’s parent company Clapham House in 2010 by the owner of Nando’s British unit Capricorn Capital Partners, the burger brand – like many in the country – was feeling the ill effects of the financial crisis.

Weekly trading conditions were described as “volatile” and, following the announcement, Nando’s said that “significant investment and time” was needed to reinvigorate Clapham House’s businesses.

As Murdoch expresses with typical British understatement, the GBK chain was in a “bit of a mess” following the deal.

“It had two and a half years of sales decline and it took us about a year to get things moving,” he says.
Fast-forward to the present day and the chief executive officer, who is visiting the company’s regional franchise partner in Dubai, has an altogether different story to tell.

Trading conditions have improved and the brand is expanding rapidly, with ambitious plans for the UK and Gulf Cooperation Council, having successfully navigated a consumer shift to more premium casual dining options.

“GBK is one of the best performing brands. It is a little bit below the radar and it’s not as trendy or fashionable as the other chains that one hears a lot about, but we’re growing harder and faster than all of our competitors both on a like-for-like basis and a new store basis.

“If you look at our business performance in the UK, we’ve had 20 quarters, five continual years now, of like-for-like sales growth every single month,” he says.

“At least two thirds of that is being driven by new customers. So we’ve created a very solid business.”

The chief executive argues the secret sauce behind this turnaround has been quite simple – a focus on the food. Since taking the helm he has changed everything that the brand offers, from the burgers and buns to the fries and milkshakes. All with an emphasis on quality.

And this is perhaps best emphasised by asking him what makes the best burger.

From details surrounding the quality of the beef, its juiciness and provenance, the flavour and weight of the bun, the freshness of the salad and variety of sauces available it is clear the chief executive had put a lot of thought into the company’s namesake.

“We choose certain cuts in the UK, we know all the cattle and where they come from. All the cattle are grass-fed and it’s the same here, all the burgers come from Australia from pedigree herds.”

This food knowledge is backed by more than 20 years of experience at some of the most recognised names on the local fast food and casual dining circuit. What began as a simple pub job on the side after Murdoch left business school soon became a fully-fledged career as an area manager with UK chain Taylor Walker.

“I was just working there and applying for jobs when the manager was removed and then they asked me to run the pub,” he says.

“I said ‘I don’t think I’m going to be very good at it’ but told the area manager ‘I do quite fancy your job’.”

In 1995, Murdoch moved to Pizza Hut, later becoming operations director for the company’s UK delivery business. He then spent two years as operations director at KFC in the UK before being appointed managing director of Pizza Hut’s French business and later CEO of its UK business. This was followed by a stint at Pizza Express, where he headed up international operations, before becoming part of the team that took Clapham House private in 2010.

During this time, Murdoch says the fast-paced and competitive nature of the food business has been one of the main attractions of the industry for him. But, perhaps most importantly, he appreciates the ability to make changes to the way the business operates and see results.

“You can do different things and measure your results quite quickly. I’m quite inpatient as a person so that kind of suited my character,” he says.

The chief executive has arguably done just that, shifting the company’s offering to capitalise on a trend for more premium casual dining that has also boosted the fortunes of brands like Shake Shack in the United States.

On the running of GBK, Murdoch says if there is an argument of quality versus cost, quality will win every time. A case in point being the company’s buns, which were changed to a better quality offering at an additional cost of 4p ($0.06) each. A seemingly minor change, yet quite significant when you consider the chain sells 100,000 a week.

But if food quality has been the meat of GBK’s turnaround, then value-for-money and better quality staff have been the bun, with a little relish from a supermarket price war in the UK pushing down food prices.

“It (the turnaround) sounds very straightforward but actually you have to make a lot of very tough calls,” he says. “We did that by working with our people in terms of trying to recruit better quality people, better quality restaurant managers and area managers right across the piece.” Taking a bigger bite of the market

Now on firmer ground, Murdoch reveals the company is eyeing expansion across existing and new markets, with plans to add to its more than 70 locations in the UK and further additions to its four in the United Arab Emirates, and one each in Oman and Saudi Arabia.

Despite an increasingly competitive landscape, as fast food restaurants adapt their offering to consumers looking for healthier and better quality offerings, GBK is showing no signs of slowing down.

But Murdoch suggests it faces a tougher challenge in Dubai than London, due to the sheer variety of outlets in the city. There are a mouth-watering 58 burger concepts and 300 burger joints across the emirate, according to local partner Food Quest.

“In many ways, it is perhaps more competitive here in the UAE than it is in London. And why is that? Because the barriers of entry in the UAE are lower,” he says.

“Yes the great locations are very difficult to get into, but there are a lot of places in Dubai particularly where you can go. So there is a lot of competition.”

Through adapting the GBK model to the Gulf Cooperation Council market, Food Quest has increased footfall in the region, according to Murdoch. He says more people have visited the brand’s restaurants here this year than last year thanks to investment in management, staff and food, plus a little more generosity than the UK market.

“If you order a burger, for example, in one of our restaurants you don’t just get a burger, you get a burger with a couple of onion rings and you also get it with coleslaw. All of that we throw in for the price.”

Building on its current momentum, the company plans to add a total of 12 restaurants this year and 10-15 annually in the UK for the foreseeable future, the CEO says. Furthermore he reveals GBK has also just bought back its franchise business in Ireland, which has a footprint of five restaurants, and plans to grow it by at least one outlet a year.

“It is our goal not to stop at 75 or 80 restaurants, we see a runway of at least 250 restaurants in the UK and many more internationally,” he says. “We’d like to potentially think about opening in other markets in a year or so. Potentially out in the Far East somewhere.”

And Murdoch believes there are also sizeable opportunities in the Middle East, where low oil prices have not dampened sales as much as expected.

In the region, the company’s local partner is renovating all of its stores to give them the same design, look and feel and intends to more than triple GBK’s regional footprint.

“The focus now will be in the UAE where we’ll be having two or three restaurants minimum this year and next year and in the next four years there will be expansion outside in the whole region, the GCC and maybe other parts.”

Store expansion aside, there may be something even bigger on the horizon for the burger chain. In November, reports in the UK press suggested GBK’s owner, private equity and hedge fund Capricorn, was considering a sale of the brand following a flurry of recent restaurant deals in the local market.

When asked, Murdoch says it would be fair to say there was “some speculation” but points to Capricorn’s 12 to 15-year ownership of Nando’s as an indication it is likely to be in it for the long term.

“I don’t know, is the short answer. Nothing is happening at the moment. I can confirm that,” he says. “If anything does happen from a change of ownership point of view – which I wouldn’t expect to happen any time soon, but if it did – it’s very much business as usual.

“We’ve got a very strongly performing brand. We’ve invested a lot in that and we’re still investing, the shareholders in the UK are investing heavily so they’re not stepping back.”

Speculation aside, Murdoch appears to be looking to the future with relish – and it is clear that burger enthusiasts across the GCC will benefit from his, and the company’s commitment to the region.