by by Dean Carroll 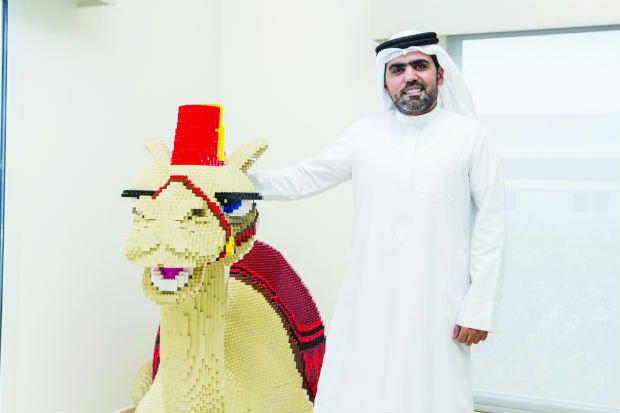 How many years will it take for the business to pay for itself in terms of the massive Dhs 10.5bn capital outlay that was necessary to build the park?

You are expecting more than five million visitors in the first year of operation. Does Dubai have the infrastructure in place to cope with that extra influx of people?

“Today, Dubai receives almost 12 million visitors annually. Dubai has been preparing the infrastructure for a long time now to achieve the 2020 vision of reaching 20 million visitors. The transport system and the airlines are fully prepared. Everything is ready for us.”

When will the metro station on the site open?

“It will come two to three years after the opening of the parks, probably in 2018. It is in the RTA plan.”

You effectively have four theme parks in one – including the waterpark – with much more vacant land surrounding the site. What are the long-term plans, might you go from four to six, eight or even 10 theme parks in one in the future as well as additional hotels?

“Within the existing development, we have enough land to expand for the next 10 years. If you take motiongate as an example, it sits on four million square feet of land but we have only built on two million square feet for the opening. We will expand as the number of visitors goes up.

“To go beyond the next 10 years, the surrounding land is owned by Meraas Holding so we can always purchase it. Today’s focus is to open in 2016 to the public. After that, we will expand as long as the demand is there for us to do so.

“The sky is the limit in terms of resorts and that’s why we included the ‘s’ at the end of resorts. We are talking about more theme hotels – not normal ones – like you see elsewhere in Orlando and Paris. Those properties have high occupancy rates when they are located close to the theme park and that’s what we are aiming for. We want demand to force us to create another hotel and we have two allocated plots within the development for such expansion already.”

How confident are you that the park will open in October, as planned?

“Of course, I am confident of this because we have already completed 85 per cent of procurement and 73 per cent of structural work. We want to do something unique for the grand opening ceremony and we are working on the concept now.”

You have five children under the age of 14. Some would say the perfect customers for the theme parks. Do you consult them at all on any of the decisions about rides and attractions, as a form of market research?

“Yes, I have my own focus group. I do take them to theme parks around the world and I see how they react to certain rides and attractions. I do actually select some of the rides based on this. I’ve realised that media- based rides, based on movies that people love, work really well.”

How many jobs will be created and what percentage do you expect to be filled by Emiratis?

“We are creating around 5,000 jobs and there will be more than 1,000 Emiratis working for us. We want Emiratis to be the leaders of the future here.”

And you have recruited many of your management team from overseas in order to get international theme park experience from the big players like Disney?

What will the make-up of rides be like, will they be gentle or white-knuckle – or both?

“The mix we will have will not only be for kids, that’s the beauty of Dubai Parks and Resorts; there will be something for children, adults and even grandparents. The three theme parks complement each other and we’ve covered every demographic. For example, for the thrill-seekers one of the roller coasters we have goes upwards to a 90-degree angle and then reverses. It will be the first of its kind.”

Would such an ambitious project as this be achievable anywhere else in the world or is Dubai unique in terms of the forward- thinking approach to major projects and infrastructure?

“The unique element of our project is that the parks are not in competition with each other because there is only one owner. Instead, they are integrated. This would be difficult to achieve elsewhere. Brand Dubai helped me to attract the best talent here from around the world, that’s one thing. Then the infrastructure, transport network, government approvals and the leadership of His Highness Sheikh Mohammed have all helped us to put this together.”

DPR seems to have started a gold rush of sorts in terms of other companies and countries building theme parks in the Middle East – including Qatar, Oman and Saudi Arabia. Most are due to come online in the next five years. How will you stay ahead of the competition?

“We’ve signed exclusive agreements relating to the intellectual property across the Gulf Cooperation Council and beyond. So, for example, there will be only one LegoLand across the entire Middle East. We did this to eliminate competition as much as possible.”

The business case for DPR is built on there being an “untapped theme park” market in the Middle East but is it a good cultural fit within the region? Isn’t the risk that nobody exploited this market before now because it would be too difficult to create a new generational and geographical breed of theme park consumer?

“Well, dubai is already a tourist-based city and those tourists usually visit theme parks elsewhere so they understand the concept. When we picked the brands, we made sure they were worldwide. In relation to Bollywood, there are three billion fans so we are tapping into a large market.

“I don’t think it’s a risk. The theme park element was missing in the Middle east. We have seen how other countries like Singapore and Paris have grown after tapping into this. We are confident that our intellectual property will attract visitors.”

There is a noticeable lack of the region’s Arabic cultural heritage and influence with the focus being on Bollywood, Hollywood and the West. Why is that?

“There are great arabic cultural locations in dubai already. To bring in this new industry to this market, you first of all need to build on something that is already famous and well known across the world including movies from Hollywood and Bollywood.

“Once you create that mass-market magnet for visitors, then you expand by doing arabic parks. You want to first create critical mass and then move onto other areas.”

Are you concerned about the health and safety of visitors in the summer months when the relentless hot temperatures may cause some people serious problems?

“Health and safety has to be the number one priority for us so we have some zones that are indoor and fully air conditioned. The attractions are also close to each other so you don’t have a long walking distance between each one. There are air-conditioned queuing areas and lots of shaded areas. We have taken a number of precautions to protect people from the heat.”

Given the heightened terrorist risk across the world, how robust will security be at the parks?

“There are strict rules and regulations in Dubai you have to follow. For example, in a park in other parts of the world you might have to install 200 cameras. In Dubai, you have to double that number and they are all connected to a centralised system. That helps to maintain the safety and security of the guests.

“Within the site, we have the ambulance operation, the civil defence team, the police and the CId. You will not feel that they are in the park but they are always there. The team members I brought in from theme parks in other parts of the world were shocked at how robust the security system is here.”

You were previously at Dubai Holding and before that you were a military man. How does this role compare to your past professional life and what strategies from your military days have you transferred across to Dubai Parks and Resorts – if any?

“Discipline is the biggest thing, being task-oriented and following detailed instructions. These things are all important. Everyone has to meet their objectives.”

And how much of the 220,000 square feet or leasable space has now been taken by outlets, and can you give us an idea of the sort of brands that will feature on the site?

“We have real demand and we have already leased out 50 per cent of those outlets including some big brands like Irish Village, Shake Shack and Starbucks. We do want to be quite selective but we would expect most of the major brands to be here.”

Finally, have you been on many site visits at theme parks around the world in order to gain inspiration, some best-practice ideas and spy on the global competition?

“Yes, of course, we visited most of theme parks in America and most of those in Europe, Japan, Singapore and Malaysia. From that, we made a comprehensive list of dos and don’ts for us to be guided by here in Dubai.”