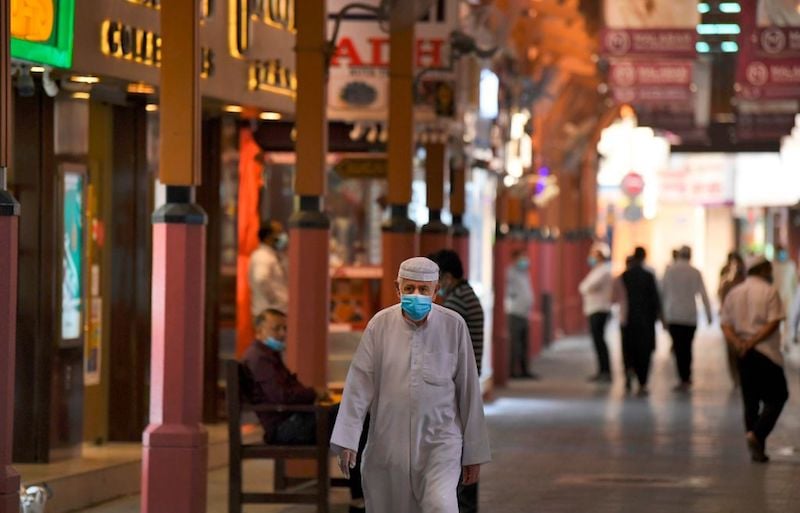 The UAE announced 832 new Covid-19 cases on Monday following 37,844 additional tests, taking the total tally of coronavirus infections in the country to 24,190.

The Ministry of Health and Prevention also reported four additional deaths, taking the death toll to 224. Meanwhile 1,065 patients also recovered after receiving the necessary treatment, taking the total number of recoveries to 9,577, the ministry said.

“We see a daily increase in cases due to the irresponsible behaviour of some people who are not aware of the consequences of not adhering to health guidelines,” said Dr Amna Al Dahak Al Shamsi, official spokesperson of the UAE government.

“The widening circle of infections requires no more than a few violations by just one or two people to completely infect families with the coronavirus,” she said.

“The decision to partially ease restrictions is aimed at achieving a balance between meeting the needs of a segment of society, whose source of income is linked to the commodity trade sector, and between continuing to adhere to the recommended health guidelines, and hence many restrictions and conditions have to be followed.”

However, she also appreciated the citizens and residents adhering to the precautionary measures.

“It is heartening for us to see many families committed to avoiding family gatherings,” she said. “As we prepare for Eid Al-Fitr, we are confident that citizens and residents will continue to adhere to health and preventive guidelines, and serve as role models to the world,” she added.

Officials also announced that the UAE’s National Disinfection Programme will now be in place from 8pm to 6am, starting Wednesday, May 20, until further notice. The scheme currently runs from 10pm until 6am.

Dr Saif Al Dhaheri, spokesman of the National Authority for Emergency, Crisis and Disaster Management said the amendment comes in light of the “increased number of Covid-19 cases, and the leniency of some members of society and their indifference to preventive measures”.

Meanwhile meat and vegetable shops and outlets selling fruits, toasters, mills, slaughterhouses, fish, coffee and tea, in addition to shops selling nuts, sweets and chocolate, can operate from 6am until 8pm.

Shopping centres and malls can stay open from 9am to 7pm starting Wednesday, May 20, officials added.

“We stress the importance of all stores and those authorised to operate to adhere to the applicable health and safety procedures, which include ensuring that the percentage of shoppers does not exceed 30 per cent of the total capacity,” said Al Dhaheri.

He also confirmed that children under 12 and those over 60 will not be permitted to enter malls and shopping centres.

“We warn visitors to the centres that the shopping period should not exceed two hours in order to reduce the crowding of shoppers, and to maintain the 30 per cent capacity.”

Al Dhaheri urged the public to avoid family visits and gatherings during Eid Al Fitr this year and to instead communicate using online means or by phone. He also stressed that people should refrain from distributing ‘Eid’ money to children.

“With regard to Eid prayers, we stress the importance of adhering to what was mentioned by the Emirates Legal Fatwa Council, which is to pray at home and to take health protection reasons as a legal obligation, a necessity of life, and a national commitment,” he added.

Officials also announced heftier fines to ensure that the regulations are being adhered to.

“It was clear to us, in light of the follow-up, that there was reckless behaviour from some individuals, along with the insistence of some to commit a certain type of violation as well as indifference,” said Salem Al-Zaabi, acting head of the Public Prosecution for Emergencies, Crisis and Disasters.

The Public Prosecution has decided to update the list of previously announced violations and fines and administrative penalties to “suit the current situation”, he said.

Some of the new fines include:

– Dhs50,000 on educational institutions, cinemas, gym, stores, parks, beaches, pools or supermarkets that do not adhere to coronavirus measures

– Dhs50,000 fine on those who don’t adhere to quarantine restrictions

– Dhs10,000 for organising gatherings with participants also fined Dhs5,000 each

– Dhs3,000 if more than three people are travelling in one car

– Dhs3,000 for companies failing to adhere to the 30 per cent limit on workforce at office

– Dhs3,000 for not adhering to social distancing

– Dhs3,000 fine for violating restrictions during the disinfection period

Repeat offenders will be referred to the Public Prosecution and can face a criminal trial with the possibility of imprisonment for a period not exceeding six months and/or a fine of at least Dhs100,000.

“The pictures and names of violators will be published in newspapers and media upon the decision of the Public Prosecutor if he deems it necessary,” added Al Zaabi.