On March 23, 2021, Dubai-based artist Sacha Jafri sold the world’s largest canvas painting – The Journey of Humanity – for a jaw-slacking $62m. On March 23, 2022, he took to the helipad at the Burj Al Arab Jumeirah with another seminal project.

Jafri painted 30 UNESCO World Heritage sites and displayed them in a 12m by 12m steel labyrinth structure called The Art Maze in an immersive gallery experience designed in collaboration with Marcus Schaefer.

As with most of his major projects, Jafri pulled off nothing short of a superhuman effort to finish the project. While he worked on the project for six weeks, on the day leading to the launch itself, he painted for 28 hours straight – without food, water or sleep – in a trance-like state to complete it in time.

There are a total of 1,154 UNESCO World Heritage sites, and Jafri’s been going to several of them since the age of four with his mother. “I’ve probably been to about 250 of them. Some of these are buildings that we’ve built – Acropolis, the Colosseum, Stonehenge, Taj Mahal, etc, and others are natural sites, desert seascapes, mountains, beautiful vistas – I love the Land of Olives and Vines in Palestine, [for example],” says Jafri. The 30 paintings include the Notre-Dame in Paris, Lumbini in Nepal, Mount Kenya National Park, Saint-Sophia Cathedral in Kyiv, and the Memphis and its Necropolis in Egypt. In addition to the 30 sites that he opened the exhibition with, a 31st painting was a tribute to the Burj Al Arab itself. 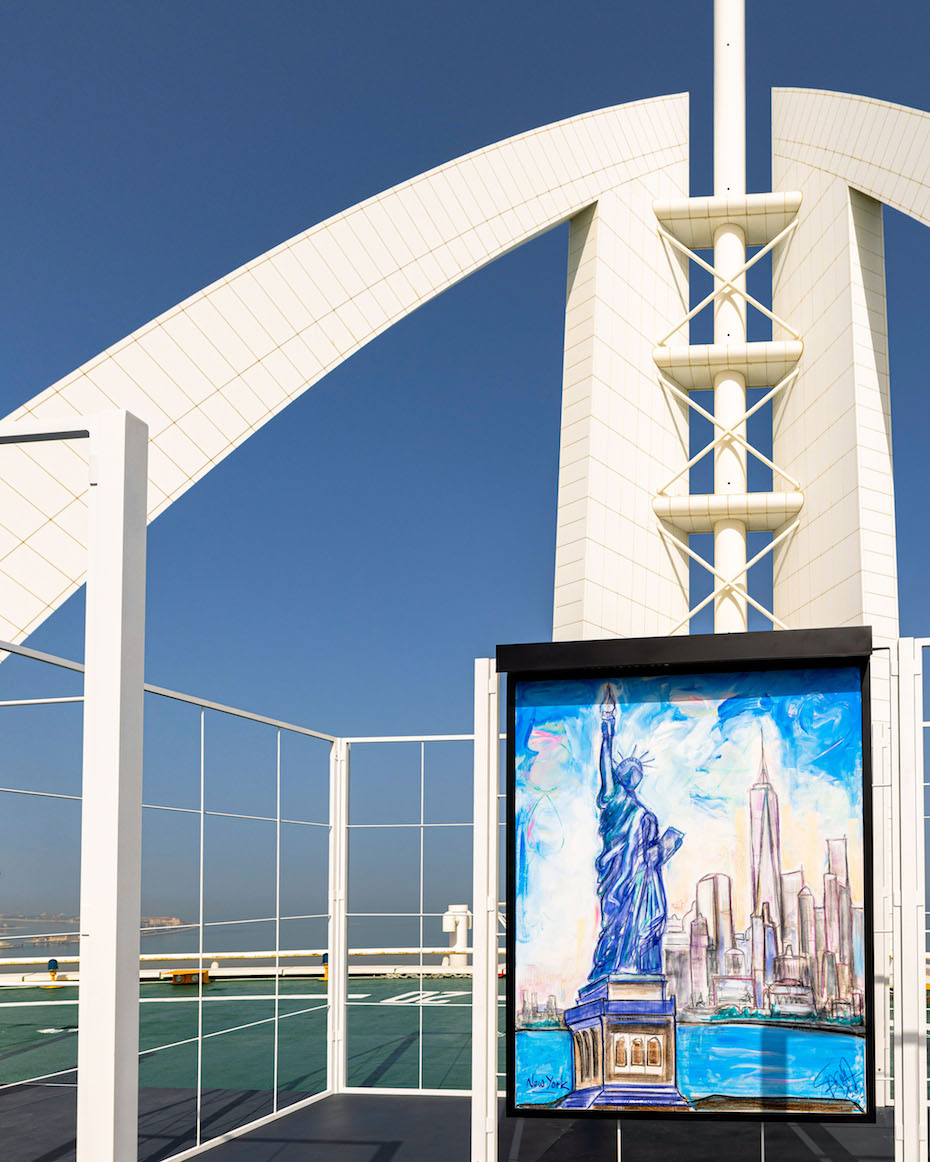 Jafri will create a total of 50 paintings to mark the 50th founding anniversary of the UNESCO World Heritage List classification. When asked to pick which of the 250 sites that he’s been to resonates the most powerfully with him, Jafri notes, “Notre-Dame has always been a special place to me. That’s when I went with my mum and dad to Paris for the first time and I really appreciated something. But I think my most special memory would be St Peter’s in Rome, the Vatican palace, and then Rome itself. And that’s probably my greatest memory as a child – appreciating art for the first time in Rome, when I saw the work of Michelangelo and Leonardo da Vinci – and that inspired me for my journey.”

The building blocks of art
Jafri, who earned the Guinness World Record for the world’s largest painting, is an artist whose work is collected by the likes of Sir Paul McCartney, Lewis Hamilton, Huda Kattan and Leonardo DiCaprio, among others, besides ruling royal families from across the world. He’s now stepping it up even further with an original work titled, We Rise Together with the Light of the Moon, which will become the first official artwork to be placed on the Moon’s surface later this year, as part of the NASA CLPS initiative.

“It’ll stay there for eternity. I’ve been working [on the project] solidly for a year. NASA has been working on it for 20 years to make sure they land on the moon this year because it’s their 50th anniversary since they last landed on the moon, which was in 1972. It’s quite interesting that two projects are celebrating their 50th anniversary – one of the 1972 Moon landing and the other of UNESCO’s beginning of the World Heritage Site conservation project,” says Jafri, noting the common thread between two of his big projects this year.

Collaborators on the moon project include Selenian, Astrobotic as well as Spacebit, which used an aerospace-grade aluminium gold plate as the canvas for Jafri’s artwork to enable it to withstand temperatures of between -173°C to +123°C. 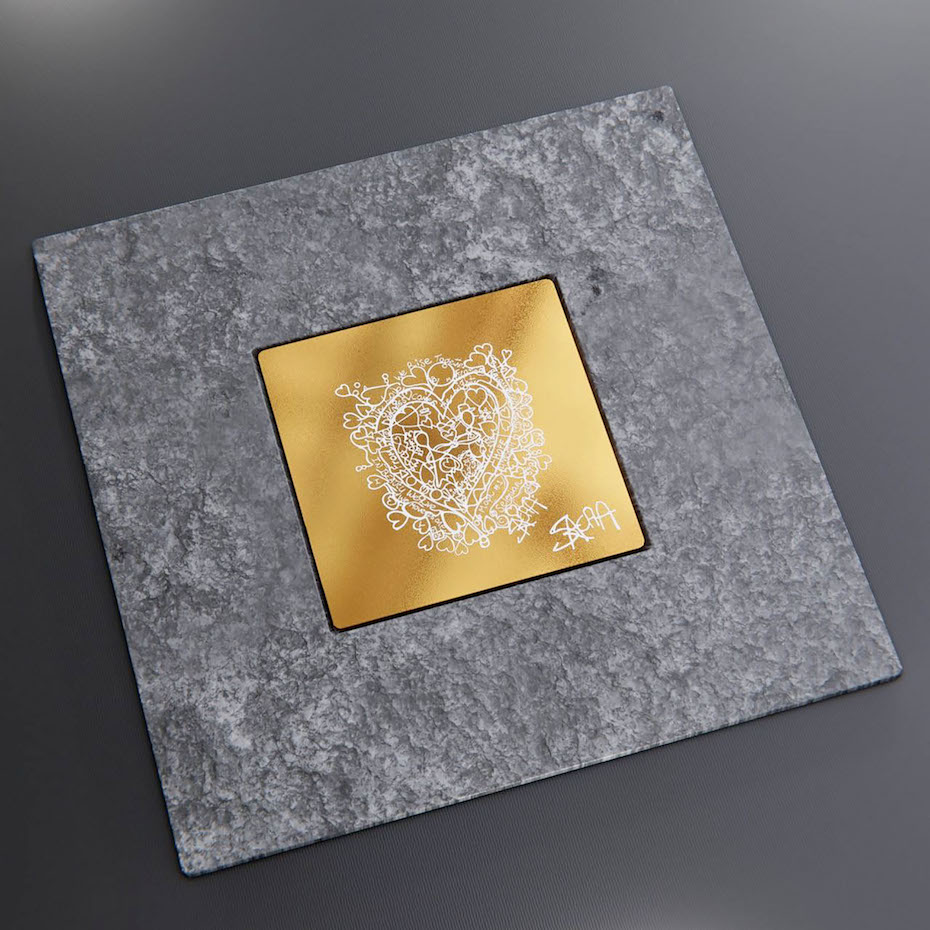 Jafri explains that his participation in the moon project isn’t intended to be a vainglorious achievement. But as a leading philanthropist, he will be creating a series of NFTs from it to further his work as a humanitarian. “There will be a charitable NFT series [from this project], which I’m hoping will raise a huge amount of money for the four main concerns of our world: education, health, sustainability, and equality of all. Any charity you think of, or any cause, fits into one of those four pillars,” says Jafri.

The artist is no stranger to NFTs. Last year, his NFT artwork titled, On the Wings of an Angel, sold for almost $1m in less than a minute at amFAR’s annual Cannes gala. “I’ve created a very special NFT project, that is my Angels project. I’ve created 100 Angels, linked to 100 charities around the world, and we hope to raise a huge amount of money for those charities,” explains Jafri.

While he’s pushing forward with the use of NFT-linked work, Jafri cautions against the dark side of the NFT world too. “In three years, 98 per cent of all NFTs will be worth zero. What people aren’t realising is that with about 80 per cent of all NFT projects, people are losing money. You don’t hear about that – you only hear those big numbers because it’s well marketed and promoted, and because it needs investors. It’s a pyramid scheme. But when that all collapses, which it will, then a real foundation will be built and a real market will be there,” says Jafri while comparing the stage at where the NFTs are at the moment, to where the Internet was in the early Nineties, having then gone through the Dot-com bubble era, before correcting itself to become a much understood and well-leveraged product.

“What is interesting with NFTs is that it creates a title deed which validates and authenticates the work in a digital space and is tapped to the blockchain. My job really is to make sure that whatever I create within that space gives value to the collector and the investor, and real value that lasts and not just meant to make a quick buck by flipping it,” observes Jafri.

It’s the NFT world that Jafri is also turning to with his next project titled, Global Pillars, which is intended to serve as a legacy project for the six-month-long Expo 2020 Dubai mega event which concluded at the end of last month. “I wanted to create a project that would give a legacy to the Expo and what Her Excellency Reem Al Hashimy has achieved. I dipped into the 10 pillars of the Expo and visited every pavilion about 10 times. I have created 10 paintings representing each of the 10 pillars – that’s 100 paintings and then an NFT project from that. With only 100 paintings, only 100 people can buy them. But the advantage of NFTs is that if you create 100 NFTs of each of those, you got 10,000 of them. Suddenly 10,000 people can buy them, own something and be a part of that project. It can raise money to help charitable causes. So that project – Global Pillars – in partnership with Crypto Oasis will be an NFT project which will hopefully create a legacy for Expo for the next 100 years.” 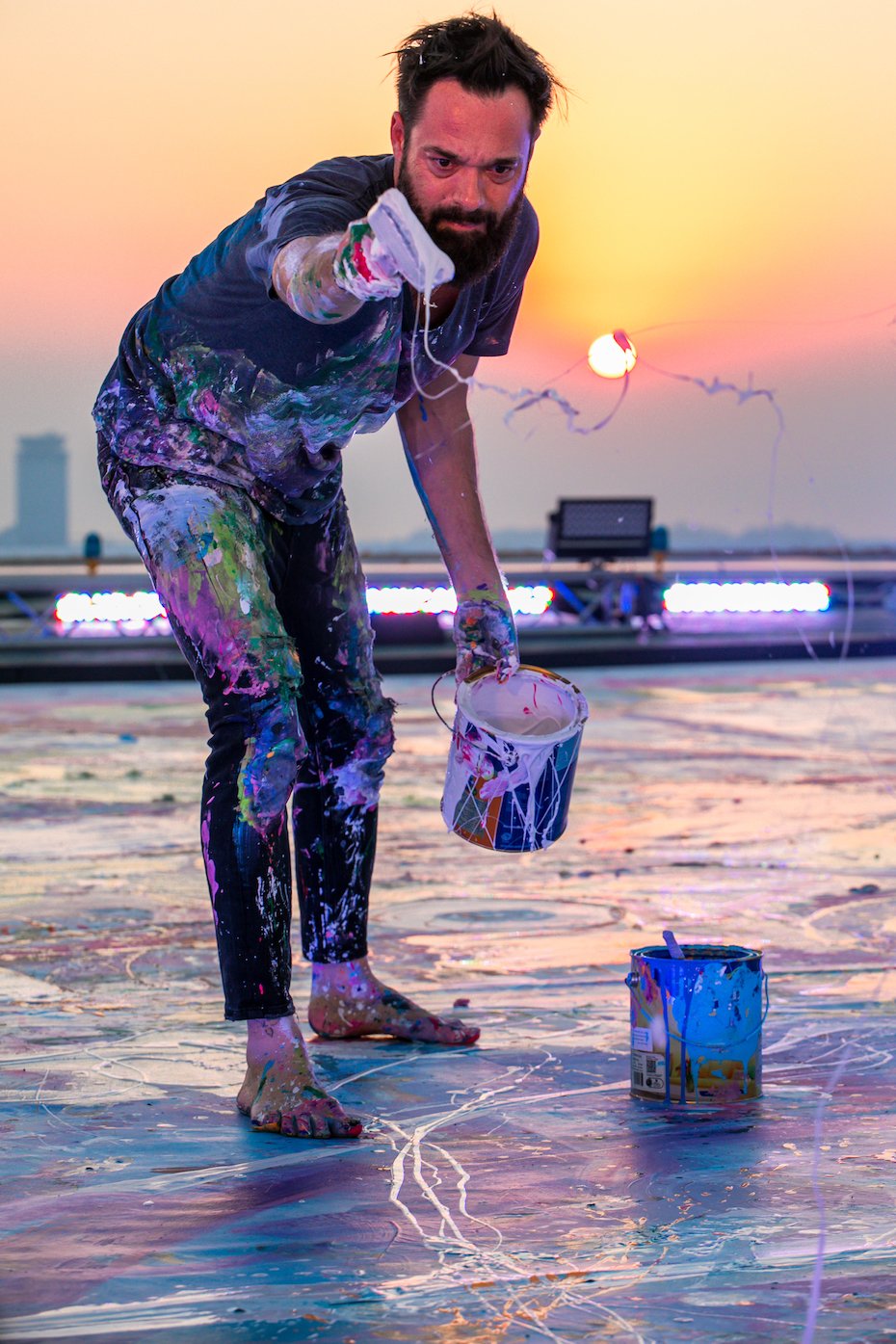 Technology is integral to Jafri’s work, and The Art Maze experience is available to view through a virtual- and augmented-reality experience. The exhibition will travel to 12 cities across six continents – and possibly 18 – over the next two years. A big-ticket showing is expected when the travelling exhibition reaches the UNESCO headquarters in Paris where it will be on display from September 12-18.

“The originals will go on sale for around $2m-$3m,” says Jafri. “But importantly, there are also artist’s proofs and prints. And there’ll be a lot made so that everyone can own something from this project. I didn’t want it to be elitist – that was really what was important to me because I want to reconnect the world and you can’t do that if you’re elitist.”