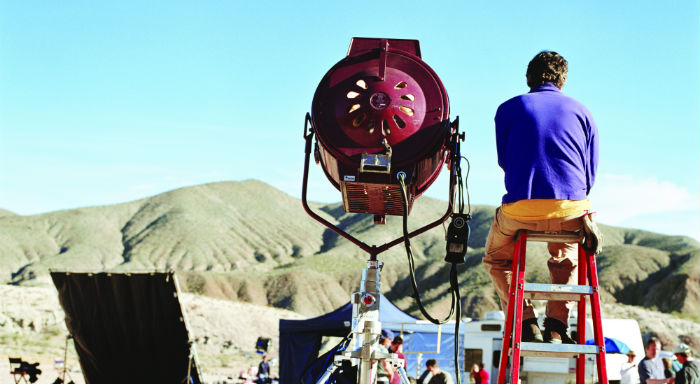 The typically empty deep interiors of Abu Dhabi’s deserts were curiously busy in May this year. Rumours circulating online talked of alien-like creatures and futuristic structures being spotted on the hot sands.

All the speculation was laid to rest weeks later, when twofour54, Abu Dhabi’s official media arm, released a statement confirming that the emirate was serving as the first location for the highly-anticipated Hollywood film Star Wars: Episode VII.

Abu Dhabi has been focusing on growing its media industry in the past few years – as part of its diversification away from an oil economy – and a key element of this strategy has been to attract international film productions to the city.

The UAE capital is luring producers with juicy bait – the Abu Dhabi Film Commission offers first international projects a 30 per cent cash-back rebate on productions, including feature films, TV shows, commercials and music videos. This rebate also applies to airfares booked on Etihad Airways and accommodation in the city.

“We are a very attractive option for filmmakers because Abu Dhabi has all the resources necessary for production,” explained Noora Al Kaabi, CEO of twofour54. “We offer free scouting assistance and a diverse range of unique locations and we have experienced, professional crew and supplier bases.

“We also have a full service offering for government liaison including permits, visas, script approval, and customs clearance and shooting permits and importantly, there is no sales tax.”

The emirate has been fairly successful so far; apart from the latest installment of Star Wars, it has managed to rope in three high-ticket Hollywood and Bollywood movies in the last 12 months. These include Universal’s Fast & Furious 7, Fox Star Studios’, Bang Bang, and Sony Pictures Entertainment’s, Deliver Us from Evil. Global TV shows such as The Bold and the Beautiful and The BBC’s Top Gear and regional productions including The Brothers, Hammam Shami and A to B have also been filmed in the city within the last year.

“When movies come to Abu Dhabi, it gives a boost to the local economy and the GDP,” said Al Kaabi. “For example, Star Wars brought approximately 650 international and local crew members and staff who stayed in hotels and dined at restaurants in the area and enjoyed the retail and tourism offerings, which in turn contributed to the local tourism market and boosted hotel occupancy.”

But it is not just Abu Dhabi that is vying to become a global film hub; neighbouring Dubai has been trying to woo international productions for many years now, with its iconic skyline, glamorous malls and a mix of traditional and modern vistas.

Over 7,000 media productions have been filmed in the emirate since 2005, according to the Dubai Film and TV Commission. While Dubai has been a favourite among Bollywood producers for many years now, big Hollywood blockbusters have also been shot in Dubai, most notably, Mission Impossible 4: Ghost Protocol in 2011, in which actor Tom Cruise scaled the world’s tallest tower, Burj Khalifa.

With such stiff rivalry so close at hand, how does Abu Dhabi compete and stand out?

“We are not simply a business park; twofour54 is intended as a breeding ground for local talent. As one of our key focuses, talent development is a top priority and we offer various schemes and initiatives that nurture and contribute to the growth of a media ecosystem.

“Film and TV production professionals know that Abu Dhabi is a production ready place with generous financial incentives, location diversity, production resources and professional support to make any size production a true success. In contrast to other parts of the region, Abu Dhabi offers a stable and secure environment,” she added.