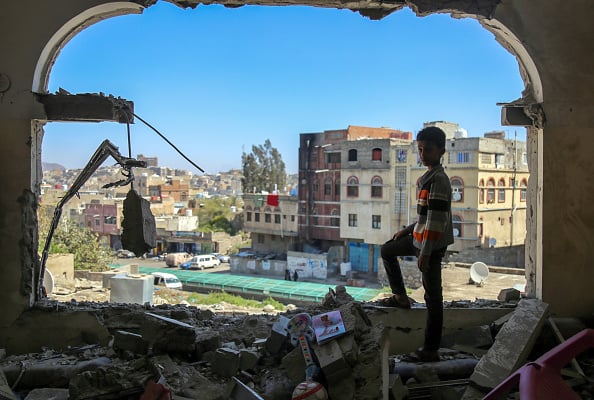 Yemeni Houthi officials are expected to travel to Sweden shortly for talks as early as Wednesday to end the nearly four-year-old war after the Saudi-led coalition allowed the evacuation of some of their wounded for treatment.

Prospects for convening talks have risen as Western allies press Saudi Arabia, leader of the Sunni Muslim alliance battling the Iranian-aligned Houthis, over a war that has killed more than 10,000 people and pushed Yemen to the brink of famine.

UN special envoy Martin Griffiths arrived in the Houthi-held capital Sanaa on Monday to escort the Houthi delegation, a UN source told Reuters. The Saudi-backed government has said it would follow the Houthis to the talks, the first since 2016.

The peace talks may start on Wednesday, two sources familiar with the matter said. Griffiths shuttled between the parties to salvage a previous round that collapsed in September after the Houthis failed to show up.

Western powers, which provide arms and intelligence to the coalition, may now have greater leverage to demand action on Yemen after outrage over the murder of Saudi journalist Jamal Khashoggi in Riyadh’s consulate in Istanbul led to increased scrutiny of the kingdom’s activities in the region.

The US Senate is due to consider this week a resolution to end support for the conflict, seen as a proxy war between Saudi Arabia and its arch-foe in the Middle East, Iran.

Mohammed al-Bukhaiti, a member of the Houthi politburo, told Reuters their delegation would travel to Sweden Tuesday morning on a plane provided by Kuwait and accompanied by Griffiths.

British foreign minister Jeremy Hunt tweeted that the evacuation as a “positive 1st step” ahead of the talks.

The coalition said in a statement it had agreed on the evacuation “for humanitarian considerations and as part of confidence-building measures” ahead of the talks, which are also due to focus on a transitional governing body.

The Iranian Foreign Ministry said it backed the talks and was ready to help find a political solution, Iranian state TV reported on Monday.

Analysts said both parties showing up for the talks would be an achievement in itself, even if there are no concrete outcomes as Griffiths tries to overcome deep mistrust on all sides.

“Neither side wishes to be blamed for the dire consequences of the looming famine, which is starting to become a reality,” said Elisabeth Kendall, a senior research fellow in Arabic and Islamic Studies at Oxford University.

“But it remains to be seen whether the political will is really there to make the necessary concessions for peace.”

Some 8.4 million Yemenis are facing starvation, although the United Nations has warned that will probably rise to 14 million. Three-quarters of impoverished Yemen’s population, or 22 million people, require aid.

The Arab alliance intervened in the war in 2015 to restore the internationally recognised government of Abd-Rabbu Mansour Hadi but has bogged down in military stalemate, despite superior air power, since seizing the southern port of Aden that year.

The Houthis, who are more adept at guerrilla warfare, hold most population centres including Sanaa and the Red Sea port city of Hodeidah, a lifeline for millions that is now the focus of the war.

Griffiths hopes to reach a deal on reopening Sanaa airport and securing a prisoner swap and a ceasefire in Hodeidah as a foundation for a wider ceasefire, which would include a halt to coalition air strikes that have killed thousands of civilians as well as Houthi missile attacks on Saudi cities.