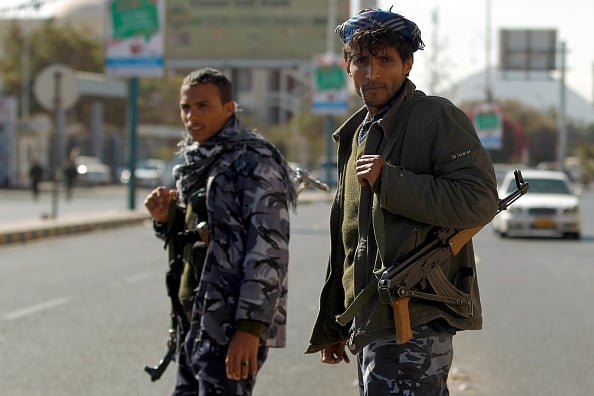 Yemen’s President Abd-Rabbu Mansour Hadi expressed readiness on Wednesday to accept demands for constitutional change and power sharing with Houthi rebels who took up positions outside his home after defeating his guards in two days of battle.

Gulf neighbours denounced what they described as a coup in Yemen, although both the Houthis and some of the president’s allies denied that he had been overthrown.

A source close to the president said Hadi had met an official of the Shi’ite Muslim rebel group, and denied the head of state was under house arrest inside the residence, surrounded since early morning by Houthi fighters.

In a statement issued in the evening, Hadi said the Shi’ite Muslim group had a right to serve in posts in all state institutions, and a draft constitution that has been a source of disagreement between him and the Houthis was open to amendment.

He said the Houthis agreed to withdraw fighters from areas overlooking his palace, his private home and the official residence of the prime minister, as well as a missile base, and had promised to free immediately his chief of staff, whom they have held captive since Saturday.

“The draft constitution is subject to amendments, deletions, streamlining and additions,” said the statement. All sides agreed government and state institutions, schools and universities should rapidly return to work, it added.

After clashes at the president’s office and home on Tuesday, the Houthis’ leader threatened in a speech overnight to take further “measures” unless Hadi bowed to his demand for constitutional changes that would increase Houthi power.

The Houthis, friendly to Iran, swept into the capital four months ago and have emerged as the dominant force in the country. For now at least they appear to have decided to stop short of overthrowing Hadi, possibly preferring to exert control over a weakened leader rather than take on the burden of power.

Their defeat of the presidential guards in gunbattles and artillery duels in recent days adds to disarray in a country where the United States is also carrying out drone strikes against one of the most powerful branches of al Qaeda.

By early morning on Wednesday, Houthi fighters, accompanied by an armoured vehicle, had replaced the guards at the president’s residence. Presidential guard sentry posts were initially empty, however a few guards later appeared and were permitted to take up positions.

“President Hadi is still in his home. There is no problem, he can leave,” Mohammed al-Bukhaiti, a member of the Houthi politburo, told Reuters.

Prime Minister Khaled Bahah quit his official residence, which had also been surrounded by Houthi fighters, for “a safe place after three days of siege”, one of his aides told Reuters.

Yemeni military sources said the Houthis also seized the military aviation college close to Hadi’s home, and the main missile base in Sanaa, without a fight.

In the south of the country, Hadi’s home region, local officials denounced what they called a coup against him. They shut the air and sea ports of the south’s main city, Aden, and closed land entry routes.

Gulf Arab states, which support Hadi and oppose Iranian influence in the region, denounced what they called terrorist acts by the Houthis and their allies.

Yemen, an impoverished nation of 25 million, has been plagued by Islamist insurgency, separatist conflict, sectarian strife and economic crisis for years. An “Arab Spring” popular uprising in 2011 led to the downfall of long-ruling President Ali Abdullah Saleh, bringing more chaos.

The Houthis, rebels from the north drawn from a large Shi’ite minority that ruled a 1,000-year kingdom in Yemen until 1962, stormed into the capital in September but had mostly held back from directly challenging Hadi until last week.

They accuse the president of seeking to bypass a power-sharing deal signed when they seized Sanaa in September, and say they are also working to protect state institutions from corrupt civil servants and officers trying to plunder state property.

Houthi fighters battled guards at Hadi’s home and entered the presidential palace on Tuesday. In his televised speech that followed, the group’s leader Abdel-Malek al-Houthi warned Hadi that he had to implement the power-sharing deal.

The accord gives the group, which takes its name from the family of its leader, a role in all military and civil state bodies. The Houthis, who say the accord has not been implemented fast enough, also demand changes to the divisions of regional power in a draft constitution.

Abdel-Malek’s speech left little doubt however that his movement was now in effective control of the country. Al Masdar newspaper referred to him as “the president’s president”.

The emergence of the Houthis as Yemen’s de facto top power in September has raised fears of deeper instability in a country that shares a long border with top oil exporter Saudi Arabia.

The Houthi action this week is likely to deepen a regional struggle for influence between Saudi Arabia and Iran, and may complicate the region’s counter-terrorism challenge. Angered by the takeover in September, and suspecting Iranian complicity, Riyadh cut most of its financial aid to Yemen.