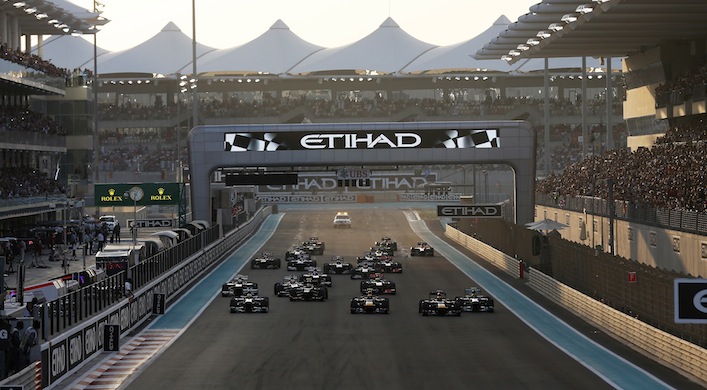 Abu Dhabi’s Yas Marina Circuit has sold out 90 per cent of the tickets for the upcoming Formula One race in the capital, it announced on Monday.

The Abu Dhabi Grand Prix will take place from November 20-23, with Mercedes drivers Lewis Hamilton and Nico Rosberg competing for double points in the season’s final race at the Yas Marina Circuit.

The circuit has allocated 60,000 seats this year – an increase of 5,000 on last year – and currently there are less than 10 per cent remaining, a statement said.

Tickets for the Paddock Club, Abu Dhabi Hill, Main and West Grandstands have sold out, and they are selling “fast” across remaining Grandstand tickets in North, South and Marina and in new products such as Marina Boxes and the Grand Prix Brunch.

“This year, the appetite for F1 tickets has been unprecedented,” said Al Tareq Al Ameri, CEO of Yas Marina Circuit.

“With the F1 Driver’s Championship coming down to the last race at Yas Marina Circuit, as well as the incredible entertainment programme we have lined up, it won’t be much longer until we sell out.”

Some of the confirmed entertainers who will play at the after-race concerts include DJ Armin Van Buuren, R&B singer Pharrell Williams and The Who.

The UAE capital, which was included in the F1 calendar in 2009, will also have firework displays and a flypast of Etihad Airways’ new Dreamliner, organisers earlier announced.

The event is expected to attract a high volume of overseas visitors, with the number of international spectators expected to rise from 43 per cent in 2013 to 46 per cent this year.