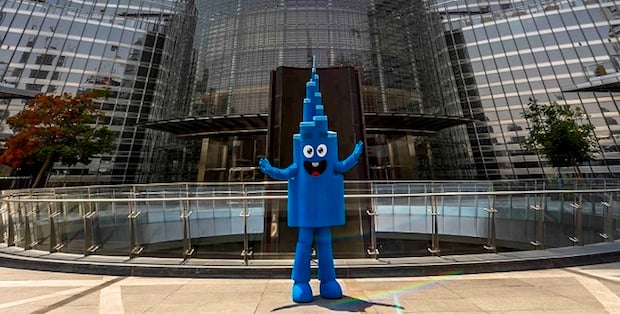 Dressed as a replica of Burj Khalifa, the mascot will be present to welcome families with children to the tower’s observation deck experience – At The Top, Burj Khalifa.

The fictional stories of Mr. Burj, who was born from a wish of a young boy, Omar, are now available in comic strip teasers on Burj Khalifa’s social media accounts.

Further promotion will include personal meet and greet sessions, photographs with the mascot and Mr. Burj dedicated merchandise, which will soon be available at the At The Top, Burj Khalifa retail store in Dubai Mall.

Mr. Burj will be joining mascots previously introduced, including the mascots of KidZania, located in Dubai Mall.

Earlier this month, the Dubai skyscraper introduced Burj Khalifa themed bottled water, in the shape of the tower. Made of K9 crystals, it has been priced at Dhs 700.

The debut of the mascot and bottled water comes just in time for the summer break with high levels of tourist traffic expected in Dubai.

Welcoming 4.1 million travellers in the first quarter of 2016, Dubai has seen a 5.1 per cent increase in overnight visitors from the same period last year.

Burj Khalifa received a record number of visitors in 2013 at 1.87 million, averaging at 156,000 people visiting the attraction each month.

Since then, the tower has consistently been one of the most popular tourist points of the emirate.

Burj Khalifa developer Emaar Properties also introduced a new project earlier this year, a tower that is expected to surpass the Burj by 100m.

The new tower will be located at Dubai Creek Harbour and will have an area twice as big as Downtown Dubai, the area where Burj Khalifa is located.

The new project, standing at 928 metres will not as tall as the 1km-plus Jeddah Tower being built in Saudi Arabia.